We’re officially in the crane business! Gene found a screaming deal for a knuckle boom crane truck (ya, don’t worry, I didn’t know what that was either – it lifts stuff like 40 feet up in the air!), and since there’s not one for rent within a few hundred mile radius, we figured that would take his construction business to the next level. 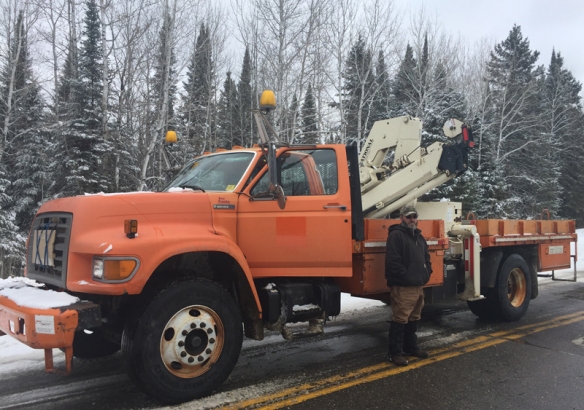 Ahem. He and Alan went to pick it up this weekend, and he’s already got a job lined up! (Which involved driving it across a frozen lake, which at 22,000 pounds is a little disconcerting. Even more disconcerting is the fact that AllState doesn’t cover that particular life choice.)

But now that it’s officially been pressed into service, Gene said I had to quit calling it “Craney” and come up with a decent name so we can put a magnetic sign with our phone number on the door. Yup, we’re in the advertising game now too. He also said I need to quit advising anyone within ear shot that the equipment storage boxes are for “snacks”.

It’s from 1996, so it could use a fresh coat of paint and some new safety signs applied, although I was thinking of just taking a marker and filling in what I’m sure they used to say… 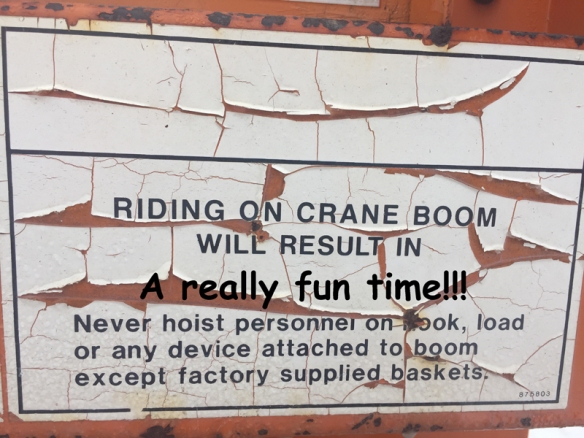 I’m a little vexed, though, because so far Gene’s been keeping Craney all to himself. I’d like to learn how to operate it as well, and what better way to learn than to try and get Ceri’s Jolly Ball down off the roof? Personally I thought that was a great idea… but Gene couldn’t say “no” fast enough, even when I pointed out it was his horrible aim that’s responsible for Ceri having to wait til spring to get her favorite toy back.

In other exciting news, the loggers finally showed up! At first I was conflicted about having them take all birches around the house, but now the view is incredible and so much sunshine comes in the house! Besides, they left a huge swatch of them along the creek and behind the barn, so there are still plenty of trees left for the birds.

But with all the noise and change, I figured the birds would want to eat their feelings so I convinced Gene we needed to add a few more feeders. He gave me carte blanche at L&M (deep down, I think he’s worried about the wood peckers too!), so I spent quite awhile studying all the labels. And then just bought one of everything. 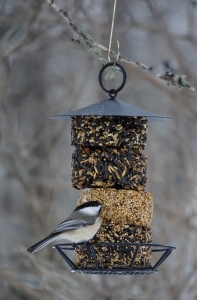 I’m a sucker for nature-related marketing. Now the birds have a Stack ‘Ems feeder, which you can load with a selection of puck shaped treats so they have literal layers of flavor!

They also have a rectangle cage feeder, loaded with a 3 Bug Blend snack block, because my birds need that to live.

Not to mention a selection of at least three suet balls, replaced as needed, and their 3 original feeding stations. Between keeping those filled and the deer fed, it’s a wonder I’ve got time to write! 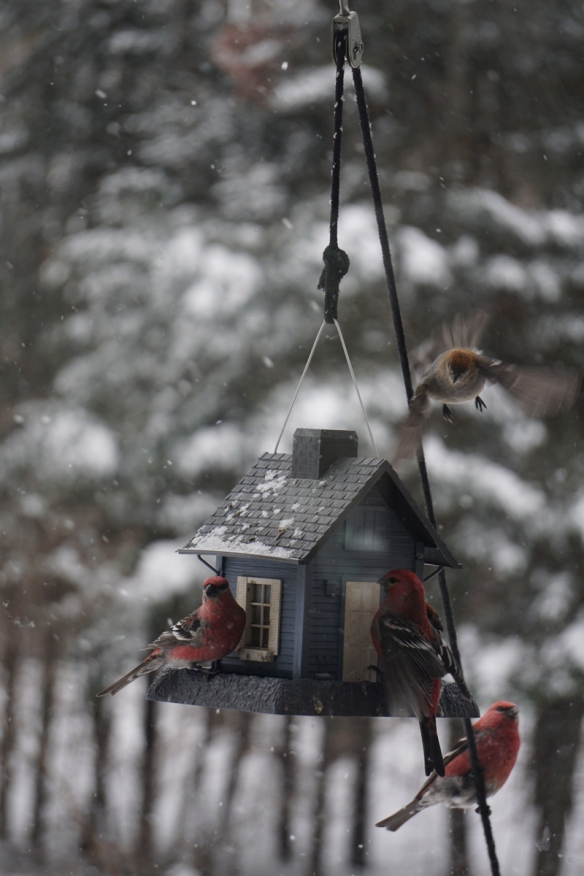