I forgot how much I hate doing chores in the pouring rain. The animals are scared of me, since they’re not used to seeing me in anything other than my signature Swamp People t-shirt. Apparently my bulky rain jacket and camo hat frightens them. Tonight I spent an hour wrangling chickens in the storm; they must have a bit of vampire blood in them because they refused to cross running water, which was cascading in rivulets all over the pasture. I wanted to put them up in the coop early so I wouldn’t have to get sopping wet twice, and they were having none of it. Since chasing them while screeching, “Don’t you want to be warm and dry????” didn’t work, I resorted to pouncing on them when they looked the other way. Challenging work, but I won. Eventually. And about five minutes after I shut the coop door, it stopped raining.

We did have sun for the official first day of fall though. I celebrated the occasion by pushing the first pumpkin of the year off the deck, which exploded into stringy goodness down below. Woolimina was particularly happy – she enjoys squash almost as much as watermelon. It’s almost time to open up the garden for the chickens, I just have to wait until my hot peppers ripen. The Trinidad Scorpions are turning a most alarming shade of red, and the Ghost Peppers are a searing shade of orange. I’m going to give them a few more days, then harvest everything. I’m a little worried about putting them in the dehydrator, because I fear the resulting pepper cloud might make the house uninhabitable. I figure I’ll cross that bridge when I come to it.

Prompted by the changing season, I decided a little redecorating was in order. The 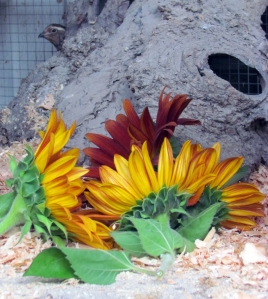 chickens had been asking for privacy curtains in the coop for quite some time, so I finally gave in. I cut up white feed bags, and stapled them to the nesting boxes with the logo facing out, which makes for cheerful pops of color in the otherwise beige coop. I also rearranged the Quail Sanctuary, and gave them some sunflower heads as a special treat. They hate when I invade their space, but as soon as I shut the door they were all over them.

After all the veterinary-related drama, life has finally gotten back to normal here on the 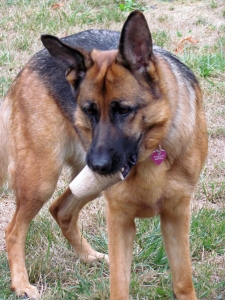 farm. Although I have to admit, our “normal” seems rather chaotic to anyone unused to sharing life with over a hundred critters of varying description. (So what if 75 of them are chickens? It’s still an impressive number). Both Thing 2 and Ceri seem to have conquered their ailments, and are now medication-free with the exception of Ceri’s allergy pills. Sadly, those are a lifelong investment. Apparently each pill takes over nine months to manufacture, so I don’t foresee those prices dropping anytime soon. That’s longer than it takes to pop out a baby!

At any rate, the most exciting news of the month has to be Bessie’s arrival. Gene had his surgery last week, so she flew out to help me with the animals and lifting anything over five pounds. Although she’s been here numerous times before, this is the first time she’s actually had to help me with chores. Anticipating an overnight stay in the hospital, I figured the best way to make sure she could handle everything was to make her do all the chores for three days prior to the surgery. Her visit has really turned into more of a vacation for me, I have to say. She’s actually doing quite well, although she has no inherent chicken wrangling skills. Apparently that’s not an ability people are born with, I just happened to win the genetic lottery. I did convince her to hold a chicken, and once the high-pitched “get it off me” screeches had subsided, the experience was enjoyed by both Bessie and Mama Buffington. 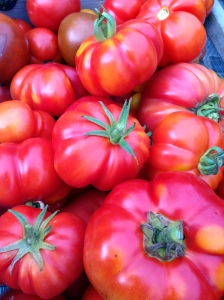 With fall right around the corner, harvesting season is in full swing around here. I’ve gotten over fifty pounds of tomatoes so far, which currently take up precious ice cream space in the freezer. When Gene gets back from hunting, we are going to make salsas and sauces. I love prowling around the gardens, harvesting basket in one hand, camera in the other, checking on everything to see what’s ripe. For the most part, all the fruits and veggies did amazingly well. With one noticeable exception. Back in February, I carefully planted (and labeled, I swear), a batch of exotic seeds imported from Africa. Several aloes, a cactus, and a couple varieties of trees. Not surprisingly, since even in the greenhouse the climate is nowhere near their homeland, not too many seeds sprouted. But I did lovingly tend to what I thought was a gorgeous, exotic Chaste Tree (it has lots of medicinal benefits – Google it!) For months I’ve watered it, fertilized it, and repotted it, catering to its every whim. Imagine my horror when a few more of them spontaneously sprouted in the garden. Apparently I’ve been tending to a weed for like seven months. No wonder it’s over six feet tall. I blame the seed people for not putting a picture of the tree on the seed packet.

But onto happier subjects – after six long years, I’ve finally been rewarded with an actual guava on my guava tree! I was 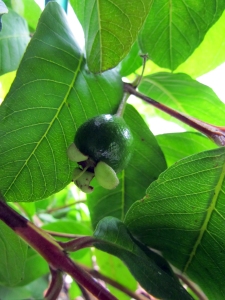 ecstatic when three of them blossomed for the first time ever, and now I’ve got an actual fruit! I have no idea if it’s warm enough for them to ripen in this climate, particularly since winter is coming, but there’s only one way to find out. This is definitely a summer of firsts – I also finally got some fruit on my Goji berry tree – one is ripening, and the other three are just sort of hanging there, looking somewhat sad. But the important thing is they’re there. Finally. The Goji tree is also about six years old. Lucky for them I’m a very patient gardener. I’m hoping for avocados next year!

As relaxing as the last two week have been outside the house, they have been packed with drama inside the house. Within three days of each other, poor Ceri’s earache came back, and then Thing 2 had to be rushed to the emergency vet with a blocked urinary tract. The poor kitty had to stay there for three days and needed around the clock care (yes, it’s every bit as expensive as you’re probably imagining). Right now our kitchen cabinet looks like I robbed a pharmacy – both Ceri and Thing 2 came home with three or four bottles of meds each, with every pill needing to be dispensed at a certain time. I actually had to make a chart, and feeding time is now as complicated as your average zoo. Thing 2 needed special, prescription canned food, which now all the cats are on because it’s good for them. And for what it costs, it better have miraculous results. Chunk is pissed because he’s on a diet, which started immediately after I noticed that Thing 2’s vet referred to him as a “very large kitty”. Since Chunk is probably twice his size, the dieting commenced. Now it takes me about an hour to separate the dogs from the cats and medicated food from non-medicated food, then dispense accordingly. I have to laugh, though, because the stampede at feeding time is pretty funny.