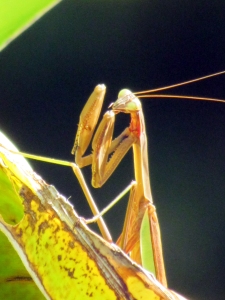 Finally my hopes and dreams of having a mantis farm have been realized. No longer will I have to wait in line at the garden store with everybody else to get my own praying mantis larva. Thanks to Jasmine, I have an egg sac of my very own just waiting to hatch next May on one of my citrus trees! I haven’t seen her in a while but I like to think she left behind her legacy in the form of 500 little mantis eggs.

Speaking of things that leave eggs sacs in their wake, I’ve definitely grown in terms of my relationship with 8-legged beasties. Thanks to all of them peacefully living in my garden, I’ve completely conquered my fear of spiders. Even 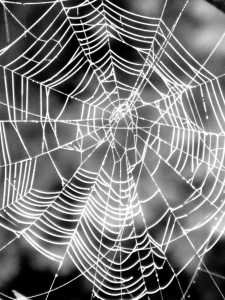 if they’re on me. (Sadly, the same cannot be said for Bess Bess. When she was here last, she moved a bag of potting soil for me, and came away with a fat black passenger clinging to the leg of her capris. My ears are still ringing.) The other night, I had that stupid stress dream where I’m in a room full of spider webs, all occupied, of course. In the dream, I have to get out, but of course there’s no clear path, no matter how much I crawl and contort. So how do I know I’m officially not afraid of them anymore?  In the dream, I looked at all those plump beasties, then shrugged, and said, “Eh, they’re not that big.” Then I just walked out. Now I’m not the type that believes you can consciously control dreams (if I could, you better believe 80s MacGyver would have saved me), so dream Andie gets all the credit for that one. I bet I never have that nightmare again. 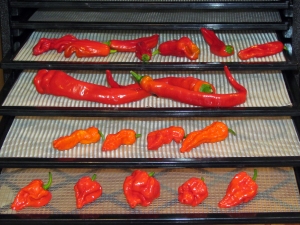 With great excitement and a thick pair of surgical gloves, I harvested my first batch of Trinidad Scorpions and Ghost Peppers. I ever so gently washed and dried them, then arranged them in the dehydrator with the more mundane cayenne peppers. I quickly researched the drying process on the internet, and concluded that our kitchen was large enough that dehydrating the peppers inside wasn’t going to be an issue. The article advised opening a window and turning on a fan, but it was cold out and I’m lazy like that. Besides, billowing clouds of distilled pepper evilness only happen in other people’s kitchens, not mine. And I was right, for about five minutes. Then I couldn’t get the windows open fast enough, and Gene resorted to lugging the entire dehydrator outside while holding his breath. But the important thing was it worked, and after a few hours passed we could use that part of the house again.

Watery eyes and hacking coughs aside, though, I’m getting pretty irked about the whole 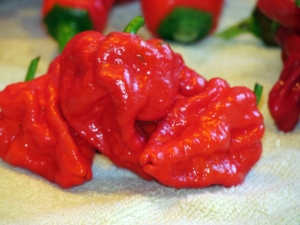 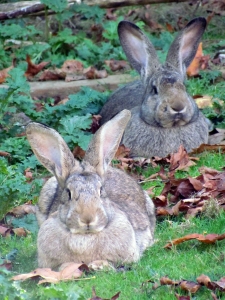 In other news, all the critters seem to be adjusting well to the changing weather. Mack and Skeeter have their favorite rainy day hiding spots carved out, and come bounding out of the woods whenever they see me to beg for a Wheat Thin. They aren’t quite big enough to scare the chickens yet, so most of the time they lose their treat to a questing beak or two. I have to herd them into the Ranch and give them a cracker pile to console their hurt feelings and let them snack in peace. Unfortunately I haven’t seen Harvey in far too long, so I’m starting to fear the worst. He’s getting up there in age, and we’ve been having coyote problems. I haven’t given up hope though, there will always be a special place in my heart for that crazy bunny.

It’s almost time to open the garden up to the chickens, and the bunnies should love that 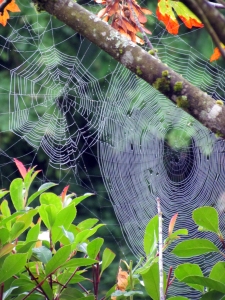 as well. I’ve harvested just about everything there is to pick, and it’s starting to become overrun by spiders. I try to let them do their thing, but some of them spin their webs right across the entrance path and I have no choice. The other day, I was in a particularly live and let live mood, so I bent and twisted and scrambled around several webs, each with a plump inhabitant smack in the middle of it. When I got through the tunnel, I turned around to look behind me, and I just about fell over. It was one of those “I can’t believe I just walked through that” moments, all gloriously highlighted by the sun. There were so many of them I called Gene on my cell phone and asked him to bring me a stick to clear a path back. Shudder.