This morning I got up just after 6 to let the pups out, and was surprised to see it was still dark outside. When I stepped off the deck, the wind started gusting, lightning flashing, and thunder rolling. Chupi could not have timed his need to pee any better – as soon as he got done, the sky unleashed. I’ve never seen rain come down that hard. It was like a silver curtain, I couldn’t even see the trees anymore!

And because the universe enjoys messing with me, I had literally just started to think “wow this is AWESOME!” when the power went out.

This was a Bad Thing for two reasons – 1) I was up that early specifically intending to crank out a bunch of writing for work that was due, and 2) losing power makes me fussy. *Very* fussy. Despite having survived (some might say flourished) during the Dark Days when the grid was down for 4 days, I seem to have some residual PTSD. 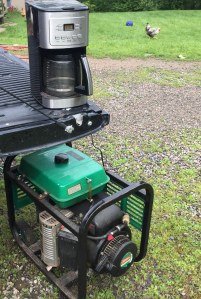 I lasted a full ten minutes before waking up Gene to inform him that the power was out. When he realized that I was fully committed to hounding him relentlessly until he did something about it, he got up and dragged out the little generator we bought used a few months back. We ran an extension from the driveway to the office, and lo and behold – I had access to the Internet. (And delicious coffee, because Gene told me I could only run two things at once. It was a no brainer.)

The downside to having internet access? I was glued to the power co-ops “real-time” outage map, where I was able to update Gene every 5 minutes on exactly how much progress the work crews weren’t making. He also threatened to hide the car keys after I mentioned how great it is that they show where the crews are actively working – I thought going to find out firsthand exactly what the hold up is was a great idea! On the plus side, after 8 hours of unmitigated whining (his words, not mine), he called the whole-house generator place to get a quote. Everybody wins! 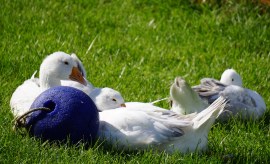 While the power outage lasted most of the day, thankfully the rain didn’t – there’s only so long I can sit and type before the urge to go outside becomes overwhelming. The geese were playing in a puddle, so I was able to swipe Ceri’s Jolly ball and play fetch with her for awhile. 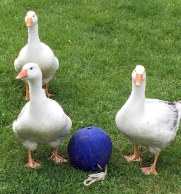 The geese have adopted it, and claimed it as theirs. They nap cuddled up around it, stand guard over it, and I’m pretty sure whisper sweet nothings to it. I have no idea why they’re so drawn to it, but they get visibly upset when I throw it for Ceri. And it’s just the blue one – they couldn’t care less about the orange one.

I’m also happy to report that the monarch eggs and caterpillars I’ve been watching over stayed nice and dry, thanks to the Monarch Sanctuary Gene made! While it’s a bit smaller than my vision dictated – I can’t walk into it and recline on a bench whilst watching my babies munch on leaves – it definitely gets the job done. 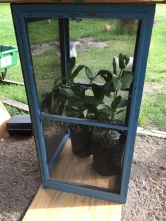 Even though I had a few milkweed plants growing on the back deck, the monarchs haven’t figured it out yet so I had to stock the sanctuary with eggs and caterpillars from my friend Jennifer’s house. We spent a happy 30 minutes carefully prowling through her milkweed patch, and I brought home 8 caterpillars of varying sizes and plenty of eggs. Should be just a couple days before the oldest ones start making cocoons.

I have to say, though, I do wish Gene was a little more excited by the miracle of life going on underneath our carport. For instance, when I asked him what he thought I should name the caterpillars, his suggestions were along the lines of “Squishy” and “Stompy”. Not cool. And when I bellowed “Honey come quick there’s an emergency!” he was annoyed that he barreled up the stairs only to discover I was talking about the spider that had somehow invaded the sanctuary. I was completely justified, though – I googled it and spiders totally chow down on defenseless caterpillars. 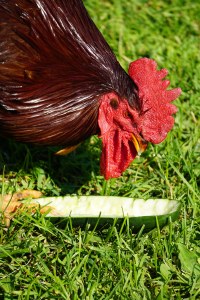 The chickens, geese, and guineas love their new quarters. They go up as soon as it gets dark, find their favorite roosting spot, and tuck in for the night. Then everyone barrels out when I open the door at first light, and spends the afternoon chasing bugs, exploring interesting bits of grass, and running around on urgent errands. And while all this is going on… horseflies are invading the coop.

They must have just discovered it, because I check on the coop a lot. Two days ago, it was particularly hot, so I went to top off the waterers – and was perplexed to hear a strange low buzzing noise. Not being one to get distracted easily, or for that matter to notice that the screen hung over the doorway appeared to be moving, I pushed my way through it… and entered the 7th ring of hell. So. Much. Buzzing. Then I looked back over my shoulder and realized I walked through a literal curtain of flies, and that I would have to do it again to get out. I can’t even. It was beyond.

Good thing I always wear my hoody, even when it’s almost 90. Yes, the bugs are that bad, and yes, purchasing a summer weight hoody is on my to-do list. I took a deep breath, gathered the hood shut around my face, and ran out. When dousing the entire inside of the coop with non-toxic fly spray only succeeded in creating clouds of drunkenly wafting flies, I told Gene he needed to break out the big gun – AKA our industrial sized shop vac.

Lord of the Flies, indeed. Between the two of us, we sucked up hundreds. Possibly thousands. Enough that the shop vac is never allowed back in the house, and I’m definitely not going to be the one that empties it. I may just buy a new one. It was that many flies. I’m surprised the shop vac isn’t angrily buzzing, to be honest. We had to repeat the process again tonight, but there were way less of them. I’m putting a mark in the “W” column for Battle Horsefly. 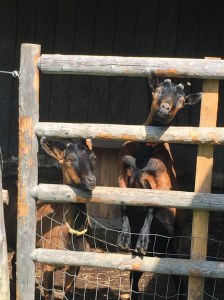 Besides – we’ve got another, bigger, shaggier problem on our hands. In the form of a bear. Last night Gene heard the goats screeching, which isn’t unusual, being that they’re goats, but they usually don’t sound off at 3 am.

He thought maybe a coyote had gotten into the pen, so he grabbed a gun and went to check it out. As he was walking back toward the house, our motion light went on and illuminated the back deck. And the bear that was lumbering around on it.

Now don’t get be me wrong, I’m not a bear hater. But A) it was like 350 pounds B) it was less than 10 feet from where I was sleeping on the other side of a sliding glass door and C) does anyone ever really want to realize they just walked past a bear, in the dark, and didn’t know it? Since he couldn’t shoot it (know your backdrop, first rule of range safety, especially when it’s your lovely sleeping wife), he shot into the ground and scared it back into the woods.

This morning I realized the bear had emptied all the hummingbird feeders it could reach, destroyed my finch feeder, ate all the sunflower seeds, and bent all the petals on the beautiful flower feeder Bess Bess bought me for my birthday.

I was especially vexed about that, I mean even a bear should be able to figure out how to open the little flap that allows access to the seeds. He didn’t need to stomp Tokyo. Churlish and rude. At least I was able to mostly fix my flower feeder. 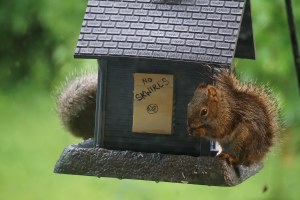 But bears aren’t the only forces of destruction around here. The squirrels managed to chew off the entire window of my other favorite feeder, the one that hangs by the living room window and gives Chupi a reason to bark all day. They also dragged it off, so somewhere out there is a squirrel nest with a plastic window that lets plenty of light into the nest. But since I couldn’t fill it with seeds any more, I asked Gene to fix it – which he did, with his usual trademark sense of humor. Too bad the squirrels can’t read… 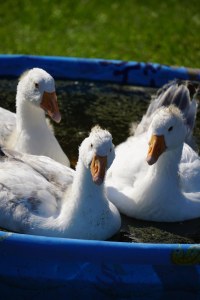 And don’t even get me started on the geese and their ability to absolutely wreck a pool. Despite it being 85 today (probably 112, if you factor in the hoody), I spent 10 minutes bailing out the water with a bucket, then refilling it with clear, tasty water. They hopped right in… and within 5 minutes, no exaggeration, it was back to looking like a brackish swamp. Let’s just say geese must have an impressively efficient digestive system, because dang.

I’m happy to announce the chickens are now happily in their new, much more spacious, natural-light-filled living quarters. It’s going to be perfect come winter – there’s enough space for them all to roam, plus have room for a treat station, dust bathing area, and activity corner! Gene even hauled a poplar trunk with branches in there, so they have a natural roosting option. Plus, since it was the old homestead, it’s wired for electricity which will make installing heated panels in the winter super easy, and it’s got a phone jack. King Midas is already grumbling about wanting faster wi-fi.

Of course, getting them used to it was a bit of a trick, and getting them in there the first night was a total goat rodeo. We decided to do the Big Migration when they were roosted up for the night in the other coop, and almost had to draw straws to see who got the “honor” of plucking King Midas from his perch. He’s turned into a bit of a monster – Gene said one more spurs-first bounce off the back of his legs and we’re having chicken dumplings on the menu. At any rate, I was able to swoop down and nab him while he was sound asleep, although he made his displeasure known loudly and longly. 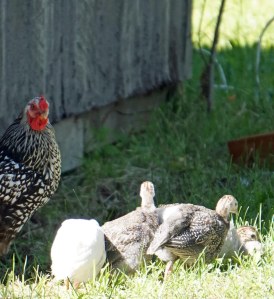 We decided that as long as everyone was getting used to the new living situation, we may as well introduce the guineas, geese, and adolescent chickens at the same time. Surprisingly, it went off without a hitch. The guineas tend to pick a hen and follow her around all day, and although the geese aren’t quite used to their new bedroom, they only put up a minimum of fuss.

I still can’t get over how fast geese grow. They’re in that that half-gosling/half-adolescent stage where their down is mixed with feathers, and their cheeps are randomly interrupted with honks that seem to startle them. I’ve also put “get bigger pool” on Gene’s to-do list. They’re still really sweet, though. Every time I go outside I bellow “Where my geesies at????” and they come running. In a good way. 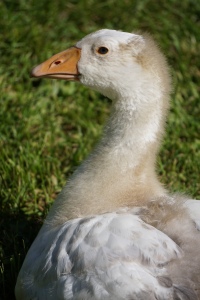 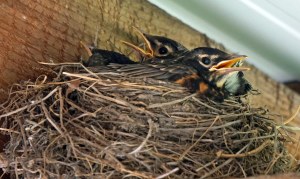 In other news, we’ve got all the gardens planted, and everyone gave me flowers for my birthday so I went nuts with the pots on the deck. It’s hummingbird central, and super cheerful to look at. We also keep the bird feeders well stocked, so there are quite a few nests around the yard. My favorite is the robin who nested for the second year underneath the car port. She’s got three fledgings, one of whom is a beast. I don’t know how the other two even fit in the nest beside him. There must be more square footage in there than it looks like from the outside.