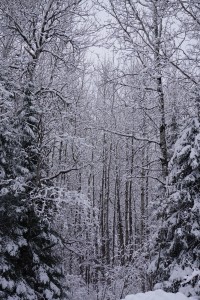 First, let me start with saying we should not be getting a literal foot of snow in almost April. It’s just plain wrong. And it’s even more wrong to be shoveling it off the deck while wearing only a t-shirt, and feeling perfectly comfortable.

Although I must say, when Gene turned all the Christmas lights back on, it looked quite festive. And before you get all judgy, we’re not the only people who still have their wreaths up. Not by a long shot. (But we are probably the only ones with lights blazing #trendsetters).

It was enough snow that I had to go shovel a snacking path for the deer too. I figure the vast majority of them are pregnant by now, and rely on us to provide vital supplementation to their meager diets. At least that’s what they want me to believe – you wouldn’t believe how big their puppy dog eyes get when they’re lined up staring at the window, silently asking why they don’t have any corn yet. 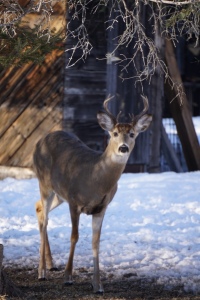 Even the buck gets in on it, and he manages to look both starving and judgemental.

Despite the snow, the warm temperatures apparently coaxed Mr. Waddles out from underneath the chicken coop. I’m sure he was lured in by tasty tidbits of over-looked corn, because he was exploring the front yard when Gene let the puppies loose for their bedtime potty excursion.

Let’s just say Mr. Waddles did not wake up on the right side of the bed. I daresay he woke up hangry, although as Bess Bess sagely pointed out, you don’t have to be hangry to be hating on tiny yapper dogs with a Napoleon complex. But one things for sure – he did not appreciate being chased under the truck by Chupi. Thankfully, Ceri couldn’t fit under there and Gene was able to haul her back into the house, then go back to retrieve our incredibly stinky yet mightily ferocious skunk hunter.

On the plus side, an 8-pound Papillon can’t wreck the bathroom to the same extent a 100-pound German Shepherd can and will.

On the down side, I don’t know why I stored my Skunk Kit (complete with enough Dawn, hydrogen peroxide, and baking soda to deal with the aftermath of a skunk the size of Godzilla) under a pile of winter coats, boots, and other household detritus.

Note To Self: if it has a handwritten note that says “open in case of emergency”, don’t bury it in the closet.

At least I didn’t break the shower this time!