Today was a momentous occasion, and it’s not just because it’s the first day of Spring (Yay! Although not that you’d notice…). Vernal Equinox aside, Gene finally let me use the chainsaw.

I think it’s partly because of my incessant whining, partly because he realized I’m actually paying attention to all the logging advice he dispenses. Here’s a sampling: 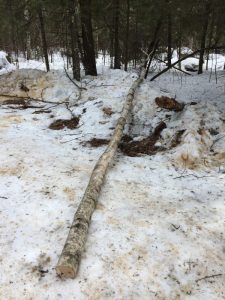 Of course I’ve learned a lot more, we’ve been going out almost every day to cut wood. (I’ll use that as a convenient excuse for not posting in almost a month!) At any rate, I was super excited, and not a little terrified, when Gene called me over to cut my first tree down.

Not gonna lie – I thought he’d let me start with a bigger one. It’s actually harder to not cut all the way through a 6″ trunk than it is to just rip right through it and hope for the best.

And apparently I messed up the “hinge cut”, because the tree started falling the wrong direction and Gene had to yank me out of the way by my sweatshirt. He then shouted something about it being my job to notice which way the tree’s falling. At least I assume that’s what he was yelling, I was wearing ear protection because I’m responsible like that.

I’m excited – he’s going down to my parent’s this weekend for a plumbing project, so I think I’ll cut a few down and surprise him with a cord or so.

And speaking of trips to my parents, I met Bess Bess down there last weekend and we made the mistake of going to Costco on a Sunday. 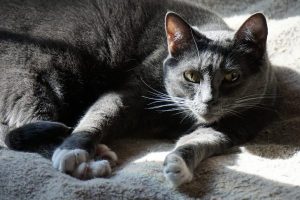 Don’t get me wrong – I love Costco. Anyone with multiple cats loves Costco because it’s hands down the cheapest place to buy cat litter, and I don’t care how many stares and whispered “Oh, my’s” I get from pushing a flat cart loaded down with 12 bags of it. I’m saving money, people.

If you ever want to see me Hulk out… follow me around Costco on a weekend. First you have to get through the parking lot, which is impossible to do without honking and flipping multiple birds, usually simultaneously.

Then you have to get in the door, which is generally blocked by people who forgot they have to flash a membership card and stop right in the entrance to dig it out. But that’s not even the worst of the offences. No, that’s saved for people who park their carts at the end of the aisles, making it impossible for anyone else to get out.

And god help you if your cart (or you, to be honest), gets between me and the cases of beer I’m about to stock up on because they’re $10 cheaper than up North. I’m not generally given to public displays of rudeness, but after an hour of fighting my way through the aisles, surrounded by delicious smelling samples I can’t eat because I’m allergic to all but 5 things on this planet, I found myself shoving someone’s cart out of the middle of the aisle while shrieking “Let me just move this for you!!!” I’d like to say I then gracefully brought my cat litter/beer cart to the register, but it took some pushing.

Sigh. Have I mentioned how much I love living in a place where it never gets crowded???