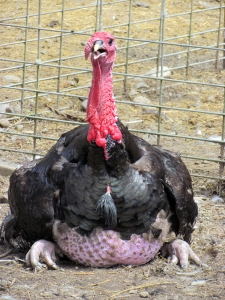 Despite the beautiful weather and lovely temperatures, perfect for foraging, chasing bugs, and hitting the pool, Dimsworth has officially let himself go. Instead of working to impress the ladies like Hawthorne, he sits in his favorite spot, remote in one hand, beer in the other, and demands to know when his recliner will be delivered. I get that molting in such a spectacularly atrocious fashion is hard on his self esteem, but still. He’s such a pretty turkey on the inside, and he has a good sense of humor.

The ducklings are the exact opposite of Dimsworth. They’re so happy and excited to be alive they act like little wind up toys, running around their play area, doing laps in the 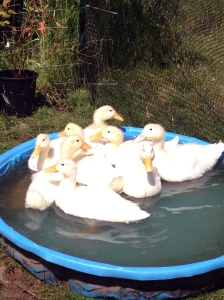 pool, and chasing butterflies and bees. Every once in awhile they fall over and take a power nap, usually in a big fluffy pile. Since pools were on sale at the hardware store, I bought one that’s big enough for all of them. As Gene pointed out, there’s room for them and both of us, it’s that big. He was worried it was too big for the ducklings to get in and out of, so I swapped the new one for one of the old, smaller ones that’s in the pasture. The ducklings are ecstatic, and spent hours swimming happily.