Granted, I’m the last person on the planet who should get on anyone else about eating too much, but seriously. Every time I take a look around the backyard, something is disappearing into something’s face. I’ve been bemoaning the depletion of my beautiful rose and bulb garden all year, placing all the blame squarely on poor Woolimina. Mostly because the sheep shearer pointed out there was a whole lot more sheep to shear this year, so I figure she’s stuffed full of gladiolas and Mexican day lilies. Today I learned I’ve been blaming the wrong fat critter – it was Harvey who put the beat down on the only spot of decorative landscaping I have. And now it’s hard to tell where the lilies even were. Sigh.

Harvey’s not the only hungry bunny on the farm, though, the babies are giving him a run 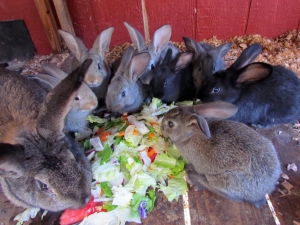 for his money. They can make an entire head of lettuce disappear in under five minutes. They come stampeding out of the corners when they realize it’s me, and hop up and down until I put whatever succulent morsel I’ve brought them down. No wonder they’re getting so big so quick.