I’m not sure if it’s because it’s spring, or if I just have exceptionally broody chickens, but I have four of them actively trying to set on nests right now. I don’t mind one or two broody mamas, especially the ones I know are good ones (not every hen was meant to raise chicks!) but I certainly don’t need four at once. There’s nothing sadder in this world than a broody mama with no eggs, and I ran out of fake ones to placate them with. Since I’ve never witnessed Jimmy and Luigi having any quality time, I figured I’d just stuff guinea eggs underneath them. Since the shells are so tough, I wasn’t worried about the egg exploding if it sat there too long. Plus, they have a distinctive shape, so I don’t have to worry about mixing up a bad egg with all the fresh ones. As I was harvesting eggs yesterday, I was startled to find an actual hatched guinea chick!!! Since they’re tiny and fragile, I put that broody mama in the garage facility with her baby, and booted out all the 2 month old chicks. Everybody is happy, especially the teenage chicks. They love being outside in the fresh air with bugs and worms to chase. 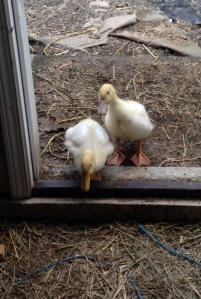 when I bring them in at night. I’ve had to increase the shuttle service from the brooding box to the outdoor spa area to 16 trips a day, since the ducklings are now so big I can only hold one at a time. They don’t mind the morning trip, but they fuss and huff when it’s bedtime. It’s hard not to laugh at their protests, since the sounds they make are now halfway between a baby cheep and a full-on complaining quack. In the mornings, they spread their wings like they’re flying as I carry them football-style to the pool. Occasionally, if the shuttle service isn’t fast enough to suit them, they’ll follow me into the garage.

Today was a little tumultuous here at the farm; I decided it was high time to rehome some roosters. My decision to cut their numbers coincided nicely with finding someone willing to buy them. Actually, Abigail found him, and I cashed in. She was also nice enough to come down and help me with the rooster rodeo, because no one was particularly happy about being stuffed into a crate. As hard as it is to part with my beautiful roosters, the hens needed a break. Now we’re down to six, and of those three are tiny. There were at least three more that I wanted to try and catch, but Abigail, much like the hens, had had enough. I pointed out that if $30 was blowing around out in the pasture, she’d be all about chasing that, but she was tuckered. At least now we have something to look forward to tomorrow!