Not going to lie… gardening in zone 3a has been a blow to my ego. Good thing my ego is massive, and can take the hit. But seriously… I know growing things here is possible, because my friend Jennifer’s garden is robust. Peppers, tomatoes, corn… hers grows. Ours, on the other hand, looks like the “before” picture for one of those Miracle Grow commercials where the take home message is anyone can grow stuff, even when your garden looks like this! [insert photo of ours]. Sigh. We’re basically pretending we never planted corn, and the only tomatoes I managed to get were cherry size, and had such thick skins they were displeasing to chew. Even the birds are leaving them alone, so you know they’re bad.

But there is a silver lining – I can grow squash! Gene helped me harvest it, all the while grumbling about where we’re supposed to store so many. Then he started saying things like, “Merry Christmas! Here’s a squash!” after I suggested we could clear out a space in his man cave. I also learned the hard way that cold weather apparently makes slugs gather on the bottom of squashes. Shudder. 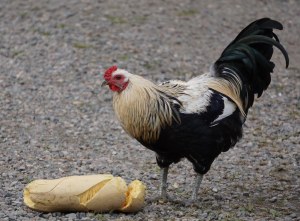 The other veggie I managed to actually grow was a yellow type of zucchini. I’m sure it would have been absolutely delicious, if I’d picked it when you’re supposed to instead of waiting for it to magically turn into butternut squash. It got way too woody to eat, but the chickens love them so I’ve been stomping on one every afternoon.

I’ve also been dispensing peanuts every morning to the jay birds, a flock of which have moved back now that it’s getting cold again. There are also two gray jays hanging around, which are a slightly smaller, much more dignified variety. They have a very distinctive call, but I don’t get to hear it very often since they don’t sit in the trees and screech at me. They’re more into the “hang out and look starving” method of getting treats, which works out rather well for them as they now have two fully stocked suet cages to choose from.