Today was a momentous occasion – we got sunshine, snow, sleet, and hail!

Each weather pattern seemed to last approximately five minutes, and changed from one to the next with no discernible rhyme or reason all day.

Tonight it’s dropping into the 20s – not the first frost, but the first hard freeze where I can likely say goodbye to the last of my flowers.

I also bid adieu to the Pollies today. After doing quite a bit of research, I found out they can hibernate in the bottom of our garden pond all winter! 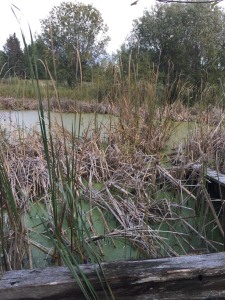 I spent an hour or so carefully draining their tank water through our second-best kitchen strainer (much to Gene’s abject horror), and once I was sure I got them all they were re-homed to the pond.

Getting them there was a bit of a hike, and I quickly regretted not taking Gene’s advice to wear my waders. Turns out dead cattails aren’t actually load bearing.

But squelchy shoes aside, the Polly experiment was a resounding success. All of the ones that had started to grow legs earlier in the month have turned into frogs! Only about 30 of the 150+ were still in full on tadpole stage – perfect for hibernating.

Gene has also been busy outside. He built a new, fully insulated door for the chicken coop, and added insulation around all the windows. Once it’s cured, we’ll cover it with trim. I had originally been tasked with shooting the foam into the gaps, so when I asked Gene how to do it, he’s all “read the can.”

Those instructions were hard core. Not only did it admonish me to “prepare and practice,” it also warned me to wear gloves, a mask, and insinuated that deploying the spray improperly would likely cause the entire planet to implode. Well, maybe not that last part, but it was seriously gloom and doom stuff. At any rate, by the time I gathered all my personal protective equipment, Gene was already done spraying it around all the windows. Minus any safety gear whatsoever, I should add.

He also installed a higher roosting bar for the guineas, in an effort to dissuade them from roosting in the pine tree. It works great, as long as I go outside just after dusk and shoo them inside. Occasionally one jumps into the tree as I’m herding them, and I’m not going to lie – few things in life are funnier than grabbing the branch the guinea is perched on, pulling it down, and launching him back up into the air. Great sport, that. No wonder they try to get as high as possible, as quickly as possible.

In other noteworthy September news, Bess Bess came for her annual visit and fell in love with the geese. She also turned them into bread-loving monsters, and thanks to her now I get honked at incessantly until I go back inside and come back out with a treat of some sort. They’re not shy about taking it, either. I’m surprised I haven’t lost a finger yet.

Whenever I have a project to do outside, I can count on three helpers tagging along. When I was getting the painted mountain corn tied into bundles to dry, they decided the cobs and shoe laces were what I brought for them to eat and went about trying to sneak them off the trailer. It was actually really funny watching Higgins trying to waddle off with a huge corn cob. Not so much when he untied my shoes for the 15th time. But he eventually figured out how to undo a double knot, so it was hard not to be impressed.