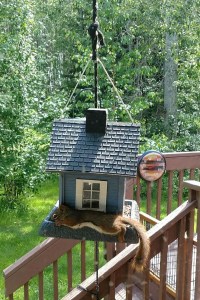 The other day, Gene noticed that the baby squirrels don’t nap much on the deck anymore. Instead, they just fall asleep right where the food is. That’s some varsity level gluttony going on.

They’ll sleep there for hours, little paws dangling off the side, fluffy tails blowing in the wind… quite the relaxing vista. Although pretty soon I’m going to have to hang the feeder with a stronger rope.

Chupa, of course, is beside himself with outrage at such blatant displays of laziness. When he’s not howling and raging at them through the window, he’ll put his paws up on the windowsill and stare daggers at them. He positively vibrates, it’s really funny. The squirrels don’t even care anymore. They just sit there and stuff their fuzzy little faces, pausing occasionally to chuck a husk at him.

But squirrels aren’t the only thing getting bigger and fatter around here. The Monarch caterpillars are getting HUGE! Gene pretends like he doesn’t care about my daily updates concerning their width and girth, but I’m sure deep down he’s happy to be indirectly contributing to the Monarch preservation movement.

It’s a tad disconcerting that I can’t tell which end is which… both their heads and their butts sport an impressive pair of antennae. They also don’t seem to move all that much; they’re either camera shy or nocturnal. It’s obvious where they’re chowing down though, and where they’ve been.

In other developmental news, the pigs have found a fun new game. They’re not content to just ram their water bucket to get my attention. Now if I dare let their food bowl go empty for longer than roughly 30 seconds, they’ll carry it out to the pasture and hide it in the tall grass. They obviously think it’s a grand game, because they race around grunting while I try to find it.