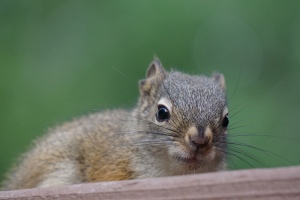 In the last several days, I’ve been having to refill the bird feeders at least twice a day. And every time I glance over at one, there seems to be some manner of squirrel hanging off of them. Usually two or three, in fact. They devour sunflower seeds at an alarming rate, but on the plus side we’ve got wild sunflowers popping up all over the place now. I can’t wait til they bloom! 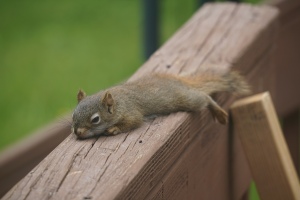 Besides – they’re adorable. They must have a nest somewhere close, because there are 3 or 4 tiny squirrels rampaging around now. They’re so young they aren’t even afraid of Gene (yet), and one of them let him pet it! Mostly they congregate on the deck, where they flatten themselves out in a most disconcerting manner and take epic sun naps after hitting the trough. 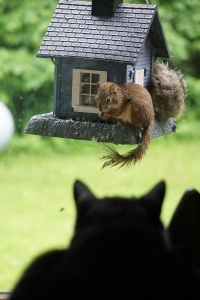 Of course their mere presence drives the dogs nuts, especially Ceri. She would pace in front of the railing for hours if we let her, trying to levitate up there through sheer will power. The adults have gotten used to her, to the point where they’ll fling themselves from tree to tree, about 4 inches from her face right at eye level. Apparently the squirrels of the Northland are jerks like that, because Washington squirrels didn’t participate in such shenanigans. They’re particularly fond of pulling up a chair to the buffet by the window, and gorging themselves while the cats keep tabs on their every movement. It’s actually pretty relaxing to watch them, until Chupa realizes the Squirrel Channel is on and tries to launch himself through the window.