So now that our pork supplies have dwindled in the garage freezer, Gene decided we could raise another pig. A few days ago we came 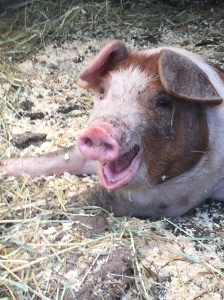 home with 7-week-old Porculous the Tasty, and I’ve already fallen in love. He climbs in my lap and eats fresh watermelon, he loves apples, and he’ll bury his head in a bag of frozen peas and corn. He also demands back scritchies and tummy rubs, and has the most adorable little snout on the planet. I don’t care if he’ll turn into a 900-lb boar if we don’t butcher him, at least he’ll be the world’s friendliest one.

So needless to say, he needs a name change. I’m thinking Porculous the Adored, or Porculous the Cuddler. Right now he’s living in the Bunny

Ranch (more on that later), where he and I can get to know each other. So far he associates me with treats, since I never come in there empty handed. In about a week, we will put him out in the large fenced area, where he’ll have a ton of shady cool areas, muddy areas, and lots of trees to rub against. Plus he can hang out with Wool and Shy, who both seem utterly fascinated by him already.

So if you’re wondering where Skeeter and Mac are since Porculous moved into the Bunny Ranch, don’t worry. They’re down at Abby’s. She decided to take them in after they decimated my raised beds in the front. Four times in a row. Not only did they chow down on all the veggie starts I’d sprouted from seed, they also ate through almost $200 worth of starts from my favorite garden store. So now I’m about two months behind where I should be, and Abigail is already harvesting broccoli. But her raised beds are covered, so they should be safe. And the bunnies are really happy – Mac has bonded with her rabbit, and it’s fun to watch all three huge rabbits rampaging around her yard.

In other critter news, the pups are enjoying the heatwave we’ve been having. Ceri in

particular loves summer – because she gets to play Sprinkler. When she looks out the window and sees me setting up the sprinkler (because this year I’ve decided I’m going to pretend we’re the type of people who care about the front lawn – we’ll see how long that lasts) she goes absolutely nuts. It sounds like an elephant is trying to knock down the front door. She could play in the water for hours, to the point where I’m almost afraid she might drown herself. She puts her whole mouth over the jet of water, and it sprays about a 40′ radius. But I literally have to drag her away from it. It doesn’t even work to turn it off, she’ll just chew on the hose until more water comes out.

Chupi, on the other hand, has discovered a family of chipmunks living in a stack of pallets in our driveway. (They’re decorative pallets, don’t judge). He’ll circle the stack for hours, peering through each level and barking whenever he sees one moving. To be honest, I’d rather they live in the pallets than where they chose to make their home last year, which was in the air filter of our Nissan. I found out when I took it in for an oil change and the tech came out and told me there was a nest in the filter, complete with mummified chipmunk. Then he asked me if I wanted a new filter. Is there really more than one answer to that question?

Anyway, the chipmunks don’t seem to mind having a

vicious predator lurking outside their home. In fact, I think they rather enjoy taunting him. And Chupi definitely enjoys the chase.

2 thoughts on “I’m anticipating a rather large problem….”