Before I commence whining about the heat (mid-90s!!!!!), let me just state for the record that it’s great for the tomatoes, peppers, and squash. You’d think there’d be less work, since the heat would chase me indoors to lie on one of the air conditioning vents (after kicking Ceri off of it first). But no, every two hours or so, I go outside and make sure all the critters have clean, cold water to drink and splash around in, and some sort of cold refreshing treat to cool down with. The baby bunnies get crisp cabbage leaves, or bright green bok choys, fresh out of the ground. The ducks prefer frozen corn niblets, while the turkeys clamor for watermelon cubes straight out of the refrigerator. The chickens don’t have a preference, as long as they’re getting something. The guineas look distinctly disappointed if frozen peas aren’t flung in their general direction, and the quails demand their usual standby of kale, preferably organic and definitely chilled. Keeping everyone happy is a full time job.

The critters all have different strategies for keeping cool. While all the ducks love 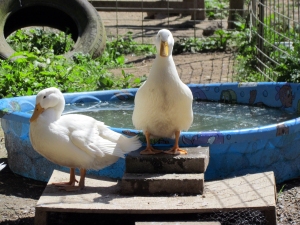 playing in the various pools, the Pekin flock takes aquatics to a whole new level. They spend hours in the heat of the day, splashing and napping. I built them a serious of steps so now they can play in the big pool. The turkeys, on the other hand, have come up with the ingenious plan of tipping over the galvanized silver waterer, then reclining in the resulting mud puddle. Woolimina discovered that the garage doesn’t heat up until about four in the afternoon, and has apparently been spending her mornings in the cool darkness, head happily stuck in the bag of game bird feed. I walked into the garage to get a tool, and almost had a heart attack when she jumped up and ran for the side door. The last thing I expect to see, particularly before I’ve had my morning coffee, is 60 pounds of guilty sheep making a noisy run for it. I guess I have to stop leaving the door open for ventilation.

As I said earlier, though, the gardens have been sucking up the heat. I have a bell pepper about the length of my forearm, and a bunch of green banana-shaped cayenne peppers. Although I don’t have fruit yet on my Trinidad Scorpion or Ghost Peppers, I do have blossoms, so my dream of having the #1 and #2 World’s Hottest Peppers should be realized soon. (If you put both of them in one salsa, I wonder if your head explodes?) But 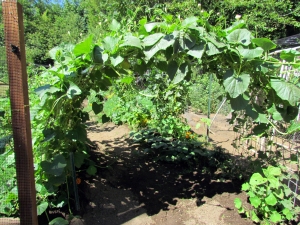 the most spectacular thing this year has got to be the trellises that Gene made me out of hog panels. I planted one of the arches with gourds, and the other two with cucumbers. For a pop of color, I added sweet peas and nasturtiums. The result is stunning – a green shady tunnel leading into the rest of the garden. I photographed it, but it doesn’t really do it justice.