When I get late night calls from Gene at work, it means one of two things – he’s stuck on a bad call and will be home late, or he’s found something really cool to bring home to me. Last time it was Raphael, the rescued ferret. This time, Gene called to tell me he’d found an abandoned fledgling robin while patrolling a parking garage. After waiting a few hours to make sure the parents weren’t around (unlikely since the baby was way in the back of the garage), and noticing that it seemed to be in quite the state of distress, he fixed it up a nice comfy box, gave it some water, and brought it home to mama, so to speak. He initially tried setting it outside and waiting to see what would happen, but the baby completely freaked out and basically rang the dinner bell for all the feral cats and rats (the two being roughly the same size in that lovely city), so he decided it needed intervention. 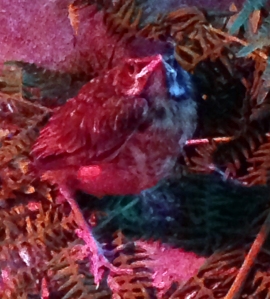 I greeted little Lobato this morning at 4:30, since I figured the wee critter needed some breakfast. I considered my options, and decided to go with raspberries, both for the high water content, and because I’m forever chasing robins out of our raspberry patch. She yummed them right up, then I tucked her back in her box. Then I outfitted the small brooding box with shavings and a heat lamp, plus I arranged some big pieces of bark and ferns so she would have a little area to hide. Next on the list was figuring out what else to feed her, in addition to the berries. Since I’m far to refined to regurgitate food, no matter what the circumstances, I considered calling my sister Bess Bess to come for an emergency visit. If anyone can make dinner taste like yak, it’s her. But then I decided to hunt worms instead. Finding one small enough was actually fairly difficult, especially considering the torrential rain we got this morning. I was turning over pots, rocks, tarps, and every other disgusting place I could think of until I finally found the perfect squirmer. It took a while, and lots of shuddering on my part, but she finally ate the whole thing! The worst part by far was when she took a chomp and I was left trying to hold on to half a warm, but I persevered. Luckily, she’s pretty close to being able to get out on her own, so once her strength comes back we’ll let her free.