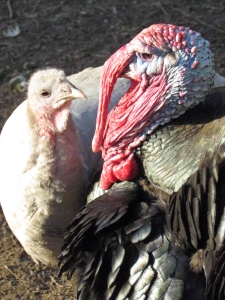 Signs of spring are all over the farm – the cherry bushes are budding, the chicks are frolicking, and the turkeys are dating. All over the place. Everywhere you look, there’s some turkey loving going on. Until the ladies decide to go wander in the woods, probably looking for a break from Dimsworth and Hawthorne. It’s rather funny, the two boys are so large they tend not to wander far from the food and water bowls. But the ladies still love to explore, so they wander the back fence, then forget how to get back and start fussing. They have a very distinctive cry when they’re lost, and when I hear it I grab my boots and wrangle them back into more familiar territory. I can’t wait until they start laying eggs – if one goes broody I’m going to try and raise some chicks! Don’t tell Gene, though, he thinks six turkeys is six too many. 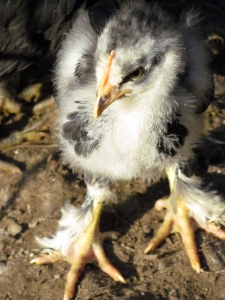 Speaking of chicks, since the weather has gotten relatively nice, I decided to let Broody Mama raise her chicks outside instead of in the brooding box. They are all feathered out, and the last batch of chicks that stayed in the brooding box until they were a few months old seem somewhat agoraphobic. The fact that the feed store got in the first batch of spring chicks has nothing to do with it. But by happy coincidence, since we had an empty brooding box, I brought home six! I got all blue cochins, one of my favorite breeds. They’re huge and social, and look like they’re wearing feathered jumpsuits. 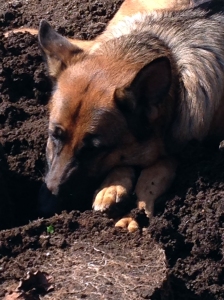 seeds yet. Despite the bursting at the seams greenhouse, I’ve planted seeds in peat pots that now line the kitchen island and several windowsills. I’ve already had to re-pot several of the young plants, a job Ceri loves to help with. Mostly by lying in the dirt pile and supervising, but I appreciate the effort and the company. Poor Ceri just got over an ear infection, and we had her tested for allergies since her itching came back this spring despite buying her top of the line, incredibly expensive, I’m a picky puppy dog chow for the last year. I had to laugh when we got the test results back – in addition to mold, birch trees, goldenrod, grass, and several of the weeds commonly found in our yard, she’s also allergic to human dander. At least that makes us even – I’m allergic to her too. So now she gets an allergy pill every night, and I’ve learned how to give her allergy shots, which she gets three times a week. The worst part, in her opinion, anyway, is the weekly baths with special shampoo that has to soak on her fur for ten minutes. I would love to meet the genius that came up with that formula, and ask him for the magic secret to keeping a shepherd from shaking lather everywhere in the bathroom. 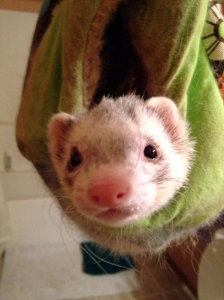 Ceri’s not the only one logging tub time this week, though. I didn’t want Raphael to feel left out of spa day, and since guests walk in the front door and ask if we have a ferret before they even see the cage, I thought perhaps a bath was overdue. He actually did really well – I won’t say he liked it, but I didn’t leave the experience with any new scars, either.