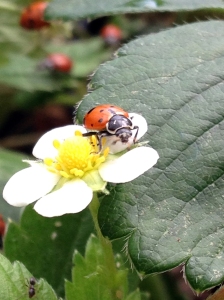 throughout the long, cold, dark months. Apparently the aphids read my blog, because I went in Monday to grab a post-lunch fruit snack, and the strawberry plants were crawling with aphids. They were everywhere, all over the berries and all over the leaves. Luckily they didn’t effect the taste, but still, that’s gross looking and I’m all about presentation. But Fate apparently heard my mighty roar, because when Gene and I went to McClendon’s yesterday we found both ladybugs and preying mantis egg sacs for sale! We bought both, and I came home and unleashed a torrent of red-spotted google-eyed death from above all over the berry plants. Your move, aphids, your move.

I went back in today to water all th 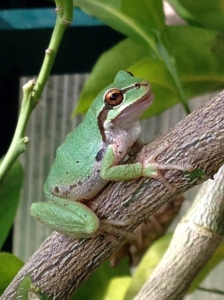 e plants, and I didn’t see as many cheerful insects cavorting around as I would have expected out of a package containing 400 hundred or so. Since I had my camera with me, naturally Willard caught my attention. As I took frame after frame, I noticed a lady bug waddle into the viewfinder. It stood nose to nose with Willard as I frantically tried to refocus on what was sure to be the Cutest Picture Ever. I was using the zoom, of course, so I got a macro view of Willard slurping up the ladybug before I could even get a shot off. If you look closely at the picture to the left, you can barely make out the bulge in Willard’s throat as it makes it way into the afterlife. Naturally, I was devastated. Watching one cute thing swallow an even cuter thing whole, in zoom mode, was worse than the time I carefully saved a tiny water frog from being crushed by the pond liner, only to have a duck snatch it out of my hand then fight over it with another duck. We’ll just say both ducks won, and leave it at that.