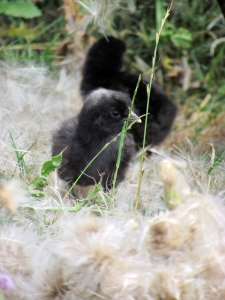 Two days ago, I decided since the garage was getting so hot in the afternoons, and the brooding box chicks were fully feathered the latest batch of chicks could go outside and start enjoying the big wide world. So last night, everybody made the transition. It went really well, and the chicks started exploring the yard right away. Gene’s idea of positioning the new brooding box so that the chicks could see the sky through the open garage door worked really well. At first I was looking forward to not having to do chores in the garage every day, but as I walked past the empty, dark, forlorn brooding box this morning I must admit I felt pretty sad. As fate would have it, I timed the mass exodus perfectly – as I made my way through the backyard to let the chickens loose, I heard a sad, frantic cheeping. I looked around and found a freshly hatched chick lying out in the open. I have no idea where it came from; apparently chicks are hatching out of thin air around here. I had found another phantom chick the day before, but sadly he didn’t make it. I scooped my latest find up and quickly parked him underneath a heat lamp in the conveniently empty garage brooding box. He seemed happy enough with his food and fresh water, but he looked so tiny and alone in the vast empty space that I immediately hopped on Craigslist to find someone selling day old chicks. One quick trip to Port Orchard later, and the found chick had two new buddies. When I went to check in on them a few minutes ago, they were all cuddled up in a soft, downy ball, chirping quietly to each other.

part of today. The Port Orchard farm had tons of animals, even more than we do! There were ducks, geese, bunnies, pheasants, turkeys, goats, chukars, and guineas. Plus, they had the coolest goat jungle gym ever – it was a couple of platforms built up around giant wooden spools, and it had to be like ten feet high with tons of climbing space. Obviously, building something similar is now at the top of Gene’s post-surgery to-do list. After a quick tour of the facilities, I was ecstatic to realize I had enough cash in my pocket to come home with two guinea hens! For now they’re living in the large compartment next door to the three chicks. They’re only a few weeks old, but they have the same reptilian demeanor as Dimsworth and Hawthorne, just in a smaller package. Since I think they will make perfect minions for the turkeys, I picked out proper Italian mafia names for them: Vinnie and Luigi. 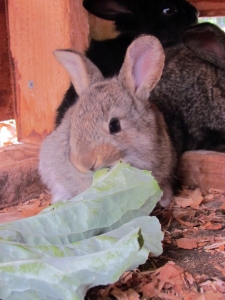 Believe it or not, three new chicks and two new guineas wasn’t even the best news of the day! As I was putting up the chickens for the evening, I saw Cinnabun sitting in the garden, making sure the celery was chewed all the way down to the ground. As I watched, another baby bunny hopped out from behind her! Luckily Gene’s daughter was here to help me catch it, and we didn’t even need to trample new paths. That brings the grand total of chubby baby bunnies up to eight. I sincerely hope I didn’t miss any more during the previous Great Bunny Roundup, but I’ll start keeping a better eye out.

I didn’t think that the bunnies would wander terribly far from the yard, since they have such a huge pasture space here. Apparently, though, Harvey has made himself a nice

little tunnel underneath the neighbors fence, and for the last year has been periodically hanging out in their yard, doing his best, “I’m such a hungry bunny, I wish someone would give me a treat” routine. His soulful big bunny eyes did the trick, and they said they’ve been presenting him with carrots whenever he shows up. Of course, he had to pick the lawn-obsessed neighbors to visit, so I’m sure they bribe him with treats to make sure he doesn’t leave hungry, thus protecting their precious landscaping. Either that, or they’re afraid to not give a 40-pound bunny whatever he wants.