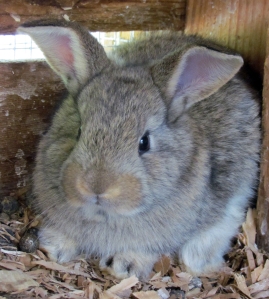 For the last two weeks, I’ve been diligently checking Cinnabun’s nesting box several times a day, looking for tell-tale signs that baby bunnies are eminent. I found tons of chicken eggs, since the chickens apparently thought I put it in the Bunny Ranch for their benefit, but no tiny baby bunnies. Yesterday, as I lumbered out of the house at dawn to do morning chores, I was greeted with the cheerful sight of fluffy, fist-sized, chubby bunnies hopping all around the garden. Cinnabun obviously took issue with a bunch of chickens sharing her quarters, and decided to birth her brood elsewhere. I was all for letting the babies free range; given the devastation in the garden and the size of their tummies, they clearly had everything they needed. But Gene pointed out that if we didn’t contain them all, it would be impossible to sell them later, since who wants forty pounds worth of feral claws and teeth? I pondered the matter further, then decided I didn’t want to be the person who made the nightly news for being singlehandedly responsible for the Olympic Peninsula’s Giant Rabbit Infestation of 2013.

Deciding that it was in Mason County’s best interest to corral the bunnies was one thing, but actually doing it turned out to be quite another. Gene just had surgery, so he had to take on a supervisory role in the round up. Abigail came over, and we armed ourselves 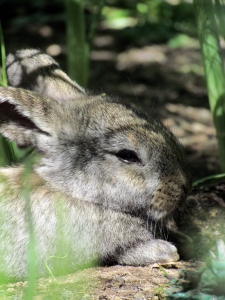 with a big fishing net, chicken wire, and deer mesh. A redneck partition quickly went up across the garden, as we figured one of us could scare the bunnies against the wall, and the other could scoop them up with the net. The plan would have worked amazingly well, had I thought ahead when planting this spring and left space to actually walk. Four hours and many, many crushed plants later, we finally had all seven bunnies accounted for. Abigail proved herself to be a natural at bunny snatching – she had six successful grabs to my one. I probably could have gotten a few more, but I kept getting distracted by eating all the ripe ground cherries off the bushes. Although not terribly happy to be confined to the Bunny Ranch, the bunnies are doing great. They’ve even started to come around to where they like to be held, which I attribute to my amazing way of communicating with animals. It has nothing to do with the constant stream of fresh veggies, wheat thins, and other treats I always bring with me. 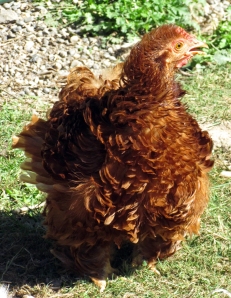 In other critter news, the trend of getting mostly male ornamental chickens has continued. Out of the four “fancy” chickens I raised from chicks, three of them turned out to be roosters. One of them, a bronze Frizzle named Urckle, is half the size of a football, but he tries to get with the ladies like he’s all that and a bag of chips. Since literally all of the ladies are three times his size, he ends up getting thrown through the air every time he tries to initiate a date. It doesn’t seem to bother him one bit, though, and pretty much every time I look out the window I see a squawking ball of crazy feathers landing in a big poof of dust.

Lucky Duck hasn’t made another journey away from the farm, although he does like to fly around the pasture. I think the other ducks are jealous, but everyone else is too fat to fly. Not because we overfeed them– they’re just flightless breeds. Lucky Duck likes to 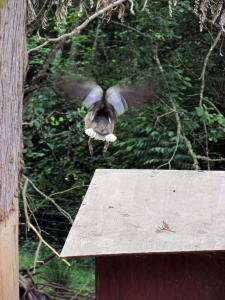 rub it in, and goes sailing over their heads to perch on the roof of the shed. Dimsworth and Hawthorne get particularly peeved at him, because chasing the ducks is their favorite pastime, and they don’t understand why they can’t follow him up to the roof. I know turkeys aren’t renown for their mental prowess, but these two definitely aren’t the sharpest tools in the shed. Thanksgiving and Christmas could at least figure out how the door to the Turkey Chalet works – I open it, and they go through. Dimsworth and Hawthorne, on the other hand, stare at the opening, then repeatedly stick their heads through the fence right next to it. I usually have to nudge them in the correct direction, then they barrel through the door straight to their feeder. At least I don’t have to show them how to eat.