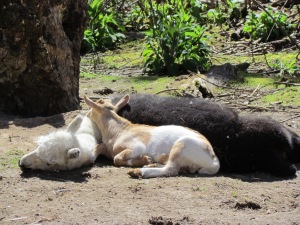 I’m a firm believer that most things happen in threes, including farm drama. A few days ago, I was on my twice-daily turkey scavenger hunt in the garage, checking every nook and cranny for the frantically cheeping poults. I was making so much racket crashing around in there, hoping to scare King Kamehameha and Pele back into the brooding box that I missed the frantic bleating from the pasture. Thank god Gene heard it, and raced outside to find little Leo being choked out by his Auntie Ariel, whose horn had gotten twisted up in his collar. It was close, but Gene was able to revive Leo by thumping on his chest and massaging his neck while I rubbed his back. The other critters were beyond upset; Shy Shy came up and gave him a head bump while the other goats made a circle around us while I sat next to Leo on the ground. After about thirty minutes of holds and cuddles, Leo was back to his normal happy self.

Since the two little turkeys seemed to hate the garage so much, Gene and I wrapped the turkey chalet in chicken wire and relocated them to it. The very next morning, I came outside to find poor King Kamehameha had been attacked and killed by a mink.

Poor Pele was devastated, so I went back to the feed store and brought home two White Midget Turkey poults, since they had run out of Royal Palms. Seeing the two new arrivals, I think Pele is actually a mismarked White Midget, because she looks exactly like her two new siblings, Sam and Rosalie. (Those are the only two hobbit names that seemed fitting for birds). To prevent another mink attack, Gene built a frame covered in hardware cloth that lines the inside of the chalet, and keeps the turkeys back about a foot from the outer edge. Sam, who seems to have a healthy dose of exploration tempered by a mammoth dose of stupid, keeps getting stuck between the two walls. He also figured out how to fly up to the roof braces, where he then gets stuck and howls until I come out and help him back down. At least they settle down once it gets dark out.

The third bad thing to happen this week involved a coyote, although to be fair the bad thing happened to the coyote. Once again Gene, who apparently is far more vigilant than I am, looked outside last night and noticed the ducks all staring at something in the woodline. If there’s one thing we’ve learned in five 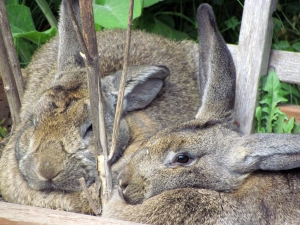 years of farming, it’s if everyone is staring intently in the same direction, someone needs to grab a gun. Gene raced outside to find a huge coyote studying the ducks intently. Sadly (for the coyote), it didn’t get the chance to enjoy one last meal before being peppered with lead. Since coyotes typically hunt in packs, I kept Harvey and Cinnabun inside the Bunny Ranch today, much to their mutual annoyance. Cinnabun loves to be outside so much she can be a bit of a butt about returning to the Ranch at night. Harvey comes running at the mere shake of the Wheat Thins box, but I usually have to go looking for Cinnabun. Sometimes the lure of tasty snack crackers is enough to get her home, but other times she needs liquid persuasion, in the form of a garden hose aimed in her general direction. I feel bad about spraying her, but figure a sodden bunny is better than a coyote snack.