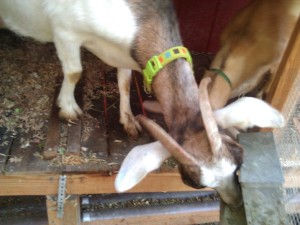 Usually life here on the farm is peaceful, calm and serene. Everywhere you look chicks frolic around softly clucking mother hens, ducks bumble along on their quest for juicy slugs and other delicacies, and goats chew their cud in the sun while contemplating deep thoughts. Other days, not so much. Chickens scatter in a burst of feathers as a frothing Farm Mama chases Daisy goat out of the orchard with a stick, only to turn around and find little Leo crammed into Harvey’s upper bedroom, snacking out of his food tray. We never had a fence-testing goat until we got Daisy, and she’s driving me nuts to the extent I actually posted an ad for her on Craigslist while in a decimated-cherry-tree-driven rage. No matter how many times Gene reinforces the fence, she finds a spot where she can climb something and jump over it. If she keeps it up, I’m going to find out why the contestants on Top Chef always choose goat first.

In calmer news, King Kamehameha and Pele are quickly feathering out. As soon as the 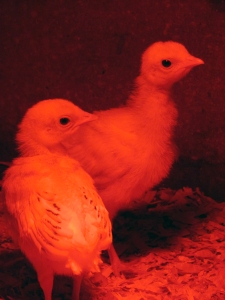 nights start getting warmer, I think I’m going to move them out into Christmas’s chalet. I’m hoping to avoid the month-long period of agoraphobia that seems to accompany moving out of the garage brooding box. The batch of chicks from Wilco, although nearly full grown, still hesitate to come outside the coop to explore the big wide world. (Perhaps they’re afraid of the crazy goat-chasing woman with the stick?) They didn’t even venture out for watermelon treats on the day it got to 86 degrees here. But another reason to move King Kamehameha is that he loves to roam. All over the garage. Then he gets annoyed that he’s not in his comfy, warm, food-containing box and starts to pitch a fit. For those of you lucky enough to have had the pleasure of trying to stumble your way through our way too-packed-garage, you can imagine how much fun it is to look for a tiny turkey. 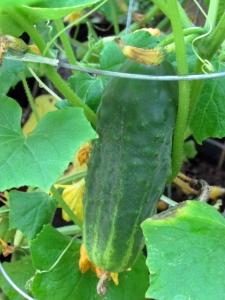 Speaking of way too packed structures, I really, really need it to be June weather now. My greenhouse has been taken over by cucumber and squash tendrils. The plants got so big I was forced to repot and trellis them, just to take advantage of the vertical space, but by giving them more dirt I gave them an excuse to have a growth explosion. I have a cucumber that’s ready to be harvested, and my one-ton pumpking has set a fruit! I also have baby ground cherries and tomatillos already, and what I think is a zucchini but I can’t get close enough to check.

The one thing I forgot to plant this year was lettuce, so I have to keep buying prepared salad bags for Harvey and Cinnabun. They 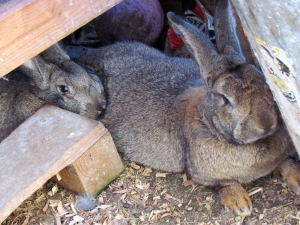 have grown accustomed to a certain level of culinary excellence, and god forbid I run out of Wheat Thins. Now that they are free to mingle, I find them cuddled up in various spots around the back yard. Cinnabun has gotten over her terror of the great outdoors, and now follows Harvey along his various bunny trails. They both come bounding back when I shake the cracker box, and stand up with their paws pressed just above my knee until they get a treat. If Cinnabun gets much bigger, they’re going to be able to push me over.