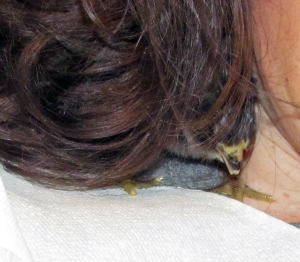 Apparently incubating eggs takes more skill than I currently possess, because we had another early hatcher a few days ago. Since she was born with strange, featherless stripes of skin on her back, I was hesitant to put her in with Broody Mama and her three chicks. Norma, named thusly due to Gene’s observation that she wasn’t quite normal, had bright red skin in between the strips of fuzz, which in the chicken world is the equivalent of chumming the waters since they instinctually peck at the color red. For the first few hours, Norma was happy in the master bathroom shower tote, but then the loneliness set in. Every time she would unhappily shriek, I went in and picked her up. She spent most of her first day on earth riding around on my shoulder, happily munching the grain I scattered on my shirt. She was served water out of my finest shot glass (featuring an alligator on it, AND it glows in the dark); with every need catered to she was the happiest of chicks. Until it 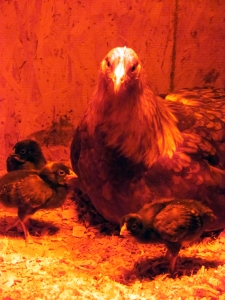 was tote-time. Then came the shrieking. I have to admit, I resorted to the electronic babysitter – she sat on my shoulder for an hour, nestled into my hair, cheeping contentedly while she watched Top Chef with me. When the two am cheeping started, we decided that since her fuzz had started to fluff up and cover all the redness, she would be okay joining Broody Mama’s family. Gene checked on her every hour until we were sure she would fit in, and when I checked on her the next morning she was cuddled up underneath her new mama’s wing, surrounded by her new sisters.

I wouldn’t have minded Norma being an indoor 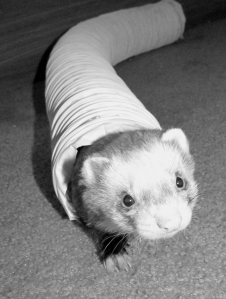 chicken for a bit longer, but it’s hard enough keeping track of Raphael without adding a flying critter to the mix. He gets progressively fatter and happier with each passing day. Pretty soon we’re going to have to trade in his favorite dryer vent toy for a wider model. I can’t wait to ask the guy at McClendon’s if the vents come in husky size. Rampaging through the vent is Raphael’s favorite game, with “got your toes” coming in second. If any of you come to visit, make sure to keep your shoes and socks on. Apparently toes are a ferret’s favorite snack.

1 thought on “How can one little fuzzball be so LOUD?”