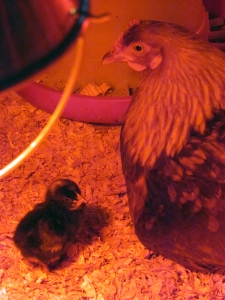 I’m happy to report that thanks to Abigail, we now have two shower options in our house again. I was explaining how I had spent the afternoon playing musical chairs with the broody hens, their hatched chicks, and their clutches of eggs. (We’re up to four broodies now.) When I got to the part about putting the two incubator-hatched chicks in the master bathroom shower (long story, but trust me, a necessary move), she had the brilliant idea of shoving the chicks underneath the garage broody. It totally worked, since the chicks were just one day old, and the garage broody’s eggs were hatching. Gene lifted broody mama up, and while he was avoiding her angry screeching beak, I stuck the two little chicks under her and she adopted them right away.

Now that all the broodies are comfortably situated, I can turn my attention to January’s most important endeavor – this year’s seed order. I’m totally in the spring, seed-planting state of mind, especially since it might be 25 degrees outside, but my greenhouse is warm and downright tropical. I even have oranges!

And perhaps even more impressive than citrus fruits in January, I have a resident greenhouse spider. In my typical highly observant, nothing-gets-by-me way, I discovered Gertrude only after Gene asked me if I realized my head was two inches away from her. When I was done screaming, he asked me if I wanted him to send her to the big web in the sky, but I decided she could stay where she was. Not even my spider aversion can make me cruel enough to throw her outside in this weather, plus you have to admire her ability to find this kind of primo real estate during the frigid weather. Now I just have to figure out how to find her juicy bugs when it’s all frozen outside. Maybe I’ll borrow a few of the crickets that Abigail feeds to her pet frogs.

But back to my seeds. I got one of my favorite nursery catalogs in the mail yesterday, and I spent most of the afternoon prowling through it. I’ve decided my theme this year is “exotic”. I ordered a baby papaya tree, a citrus tree that has oranges, lemons, limes AND tangerines, all on the same tree (Frankenfruits!!!), and some Luffa sponge seeds. I’m particularly excited about the Luffa plant – when the fruit is ripe, you can remove the outer rind, and the inside turns into a sponge! According to the catalog, the sponge is acceptable for use on dishes, in the shower, and on your car. Probably not the same sponge for all three things, though. I ordered two packets, telling Gene if the apocalypse ever comes, we’ll be properly exfoliated and have shiny cars.

check out their catalog!

As excited as I am about the prospect of growing my own sponges, I’m even more excited about the Giant Sakurajima radish seeds I found. The catalog states, and I quote, “If you want a radish the size of a watermelon, plant this one.” Who wouldn’t want a watermelon sized radish???? Sigh. Gene, apparently. He was less than thrilled when I woke him up to describe my 15-pound radish find in detail. He wanted to know why I would plant a freakishly huge variety of vegetable that 99% of the population hates. Bess Bess, at least, was excited about it. She said I would have to throw a party for the express purpose of serving it. I mentioned that to Gene, but he remains firmly in the “15-pound waste of space” camp. In an effort to prove him wrong, I present to you my list of 10 Things You Can Do With a 15-Pound Radish:

I’m sure Gene will now agree that I should plant all of the two packets I ordered. I also need to remember to tell him he’s got to find a new place to park the truck, because I also ordered seeds for pumpkins that grow to weigh a ton!