Now that the real winter weather has set in, I find myself indoors more than usual. I’m spending my afternoons cozied up to the wood stove with a cup of tea in hand, planning and scheduling next year’s garden. And my cozy little nest is conveniently located next to Raphael’s cage, so I don’t even have to get up to clean what I now refer to as his bathroom platform. I swear, I’m going to give him a little bell to ring when he needs toilet paper service, and I’m going to change his name to Sir Dukesalot. Good thing he’s cute, cuz damn. All those paper towels ain’t cheap. 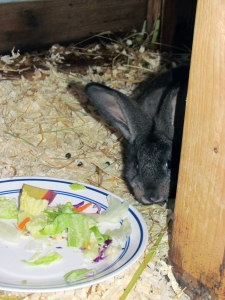 Cinnabun, who is adjusting well to the luxurious amenities of the Bunny Ranch. She had a bit of a scare when confronted with her plated salad for the first time, because apparently she’s never eaten off of good china before. But plates are standard here at the Farm; just because they’re animals doesn’t mean they have to eat like one. It used to drive Gene nuts to look outside and see the same table service being enjoyed outside that he was currently eating off of, but once I explained my reasoning he said he understood. Then he quietly added “that you’re crazy,” but I chose to ignore that part.

In his defense, I don’t think he’s that far off the

mark. Just yesterday, when it was pouring down icy rain, I found myself outside with a shovel, looking all over the backyard for dry dirt. Broody Mama, who is temporarily living the high life in the brooding facility in the garage with her two chicks, put in a request for a dust-bathing box. I had gone out to check on them, and she was lying on her side in the shavings, flipping them over herself in an attempt to dust bathe. When she noticed me watching her, she started to flip the shavings in my general direction while glaring at me. Thus, the hunt for dry dirt was on. I found some too, even though I had to dig underneath the back deck to get it. But the important thing is she’s happy. And I’m only a little bit crazy.