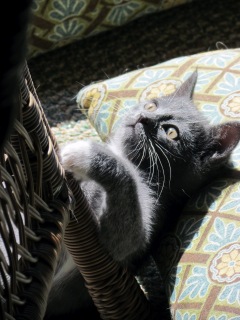 So the other day Gene and his daughter  went to Safeway to pick up a few things for the holiday weekend, like milk, bread, and hamburger buns. They came home with all the ingredients for a fabulous 4th of July BBQ, and a tiny fuzzy kitten. It turns out no one, not even Gene, is immune to the magnetic, crowd-drawing cuteness of a box of free kittens. According to his daughter, the competition to snag a meowing ball of fuzz was so fierce she had to stick her hand in the box and grab whatever she could. She ended up choosing well – Charlie made herself at home the instant she was carried across the threshold. Her tiny presence seems to have kicked in Ceri’s maternal instincts, and it’s amazing how gentle a 75-pound German Shepherd can be with a 4-week-old kitty. Charlie doesn’t return the favor though – all of us are sporting scratches of various depths and lengths all up and down our arms and legs, and occasionally faces. Charlie’s favorite game involves leaping at you from three feet away, then scampering up your clothes to perch on your shoulder like a crazed parrot.

Getting used to a new addition isn’t unique to just the indoor critters – a few days ago we put the brooding box chickens out into the big coop. Like last time, we snuck them out at night, hoping to fool the sleeping chickens into thinking they’ve been there the whole time. For the most part it worked. The only downside was the 16 new arrivals tend to mill around on the ground, which has prevented the older chickens from using the brand new nesting boxes Gene installed in the coop. They are bumped out from the wall, since we needed all the square footage possible to house the new arrivals. I finally figured out where they were depositing eggs, which of course was in the most inconvenient spot imaginable – underneath the lower deck as far back as they could get. Since my egg sales pay for their food, you’d think they’d be more considerate about where they lay them. Since crawling under a deck isn’t in my job description, I decided I needed to do what I always said I wouldn’t – fence them in. It wasn’t just the inaccessible eggs though, it was the fact that five or six of them routinely jump over the fence into the neighbor’s yard. Given a chicken’s ability to utterly destroy landscaping in under five minutes, and the fact that the neighbors hire a landscaping crew to come weekly, I feel somewhat compelled to chase them back to our side of the fence whenever I notice they’re missing. The last straw was when I looked up after a particularly grueling (and up to that point unsuccessful) chicken chase and noticed the other neighbor staring at me while he swept his driveway. I don’t know if he was staring at the squawking, cavorting chickens or the fact that I was wearing flannel pajamas and knee high muck boots at eleven in the morning, but that was the moment I decided to fence them in. Some things are best kept contained to my yard.