Sorry it’s been almost a month between posts… it’s the busy season here on the farm!

Lots of changes have happened in the last month, some good, some bad. In sad news, poor Thanksgiving made the transition to the Big Farm in the Sky. Despite doing well on his new diet, his legs finally gave out and Gene had to put him down. I miss him more than I thought I would, especially when I take my camera into the goat pasture. He used to sneak up behind me and then sit on my feet while I photographed the goats. He’ll be missed. Except for the whole pecking at my kneecaps thing. I’m not going to miss that at all. Christmas was lonely at first, but she bonded with the flock of ducks and seems quite content now. They all cuddle underneath the goats’ sunning platform in a huge feathered pile. She has continued Thanksgiving’s tradition of sneaking up on me, but she’ll settle down right behind my feet, ensuring that I trip over her if I back up. 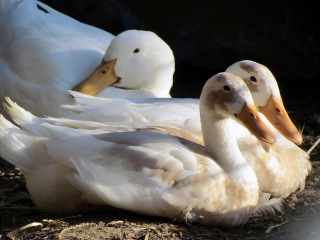 The ducks, particularly Jack and Daniels, the Jumbo Pekins, are fat and happy. In fact, Jack has difficulty getting out of the pool since he’s got so much girth to haul around. Jumbo Pekins are one of the largest, if not the largest, duck breeds. I put their swim ladder back in the pond, and he’s quite content.  The five new ducks should start laying eggs any day now, at least the girls. I discovered just the other day that at least one of the Indian Runners is a boy; he turned their blue plastic wading pool into an episode of Ducks Gone Wild during their evening swim. He’s not specific either, he got to home base with two of the Indian Runners and one of the rescue ducks before Jack finally kicked him out of the pool.

The baby chicks still look decidedly reptilian – it’s fairly unsettling. One of them has a poof of feathers on her head that looks like those ridiculous baby bows new moms put on infants. I’m really, really curious to see what they’re going to grow into, because they have freakishly long wings and huge eyes for their body size. Broody Mama has been an excellent first time mother; now that the weather’s nice she trots them all over the yard, teaching them to hunt for bugs and other treats in the grass. She has also taught them that whenever I come out and stand on the deck, the odds of it raining treats are extremely good, and now the three chicks join the stampede to see what I’m going to throw them.

In goat news, we think that Ariel might be pregnant! It’s notoriously hard to tell when Pygmy goats have one in the proverbial oven, because as a general rule they’re a fat breed to begin with. Her belly seems slung low, though, as opposed to sticking out to either side, so we’re hoping she’s got one on the way. If she is pregnant, she’s due in early August, since Jack and Sam were here in March. That gives Gene just enough time to build the nursery addition to the goat shed. And if she’s not really pregnant, we’ll have space to put one of the many, many baby goats currently available on craigslist. Either way we win!