Today was absolutely beautiful. Every where I looked there were animals peacefully basking in the sunshine. All except one. Christmas spent most of her day parked in front of the kennel, staring hungrily at Sean Paul and Marley, the little roosters. If she was capable of it, she would have been drooling. She’s rapidly convincing me that she will be first to nestle amongst the mashed potatoes and gravy. I heard a ruckus yesterday, and ran outside to find Christmas and King Julian having another row through the fence. Christmas was chittering like a demonic wind up toy, and King Julian’s feathers were standing straight out from his neck. He would stick his neck through the holes and hang from Christmas’s head. It was horrible. It was hard to decide which one I was less scared of, but I finally opted for shoving Christmas back with my boot. She would immediately run back to the fence though, so I changed tactics and booted King Julian. That distracted him from Christmas, but then he decided to go after me. I ran away from the fence, and I’m faster than him, so crisis averted. 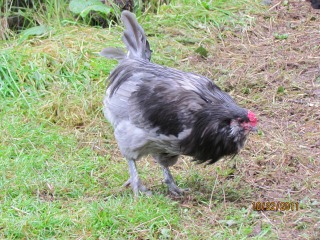 Unfortunately it took King Julian a few fights to realize Christmas is not a turkey  accustomed to losing. I went outside to find poor King Julian’s long fancy tail spread all over the yard, right in front of the fence. On the plus side, he now completely ignores Christmas, but he sure does look ridiculous. I hope his feathers grow back soon, because aesthetically he’s quite lopsided. Christmas, on the other hand, is walking around congratulating herself on how tough she is. She has started parking her butt right inside the kennel door at night when I go to feed them, so poor Thanksgiving can’t get to his food. He is far too uncoordinated to maneuver around her – he’s so fat forward is really his only option. He just bumps up against her, then stares at his food bowl looking confused by the fact he’s not eating yet. Since I’m still one-handed, I can’t just pick her up and move her, and truthfully I’m a bit afraid to bend down within eye-pecking level anyway. I don’t have the heart to kick her, even though she totally deserves it, so I usually just climb over Thanksgiving, put my boot up against her and slide her across the floor. Which is quite the workout, given her girth.
Oddly enough she isn’t a complete pig when I dispense treats; I really think she knows her name because if I say, “Here, Christmas”, she’ll eat that treat, and not chase after everyone else’s morsels. The all around favorite is apple and grape slices. All the critters, even the ducks, recognize what the white bowls mean, and the minute I step off the deck with one there’s a stampede to the pasture gate. Literally, a stampede. I need to take a video of it, because few people have witnessed the spectacle of 6 ducks, 2 goats, 2 turkeys, and 11 chickens rampaging toward them. Treat dispensing isn’t something to be done lightly, however. Thanks to Christmas, you can’t let your hands dangle down within her reach, because she’ll mistake your fingers for grape slices. Or she just likes to bite. Either way, you’ll need a Band-Aid.

Harvey and Claire also get excited whenever I walk into the Bunny Ranch with a bowl. They will both zoom around the perimeter, then barrel up the ladder to see what I brought them. They are also partial to grapes and apples. Gene says I have to figure out something we can grow here to give them as treats; apparently he doesn’t agree with me that the whole reason for earning a paycheck is to buy nutritious critter snacks. Really, how can you deprive something that cute of fresh apple slices?