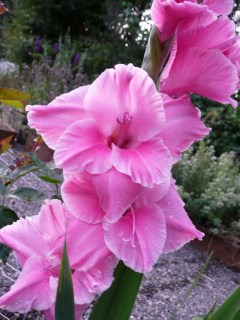 All my long term readers no doubt remember the epic battle that took place on the farm earlier this year when I was dealing with the rampant aphid infestation in the greenhouse. Well, the aphids have moved on to greener pastures, so to speak, but I’m now dealing with a teeming hoard of flies in the chicken coop. Don’t get me wrong – they aren’t large flies by any means. They don’t buzz particularly loudly, nor do they swarm around my head the minute I walk in. They’re polite flies. But still. They’re there. In large numbers. They fly in their busy little figure 8 patterns just high enough up that the chickens can’t reach them, and unfortunately there are more of them every day. Gene installed some of those sticky fly strips, and that helps a little. He mentioned in passing one day that he had put them in there, which of course I promptly forgot. Thanks to my legendary ability to notice my surroundings, I walked right into one of them. Trying to untangle your hair from the glue strip while avoiding having to actually touch any stuck flies is difficult, especially when you can’t see what you’re doing. I would prefer combing out bubble gum, because it doesn’t buzz angrily at you. So after I finally freed myself, I went to harvest the eggs. And no, I didn’t look up. Walked right into another one. Sigh. And by the way, I’m illustrating this paragraph with a pretty flower picture, because the way the stuck flies look on the paper creeps me out, and it’s like the only thing in the history of this farm I haven’t photographed. 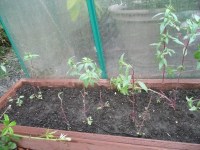 In other pest related news, something weird is happening to my azalea seedlings. They looked… munched. I would blame the chickens, because they tend to maraud and pillage like that, leaving a wake of garden destruction, but I don’t think they can reach that high. I don’t think it’s slugs, because then the stems would be bent over. And the really weird thing is only the azaleas on the left of the bed are getting eaten. For now I’ve filed the mystery under “WTF”, because I’m too busy fighting the flies. Not to keep harping on my battle plan, but if the fly paper doesn’t work fast enough, and their numbers continue to multiply, I’m going to drag the vacuum outside and suck them out of the air. (And I’ll make Gene empty the canister when I’m done, because that’s just gross). Either that, or I need to figure out where they sleep and bring the noise, as it were. They magically disappear at dusk. 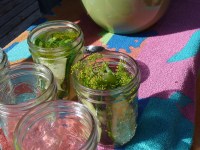 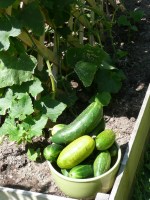 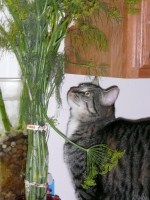 But enough talk of carnage. In happier news, Storm and I made a batch of dill pickles from the latest cucumber harvest. I love the way fresh dill smells, and I even love the smell of vinegar simmering on the stove. Whenever I get a whiff of it, I start thinking about fall and harvesting. And then Gene ruins the mood by walking in and declaring, “It stinks in here, open a window.” I still think there’s something magical about the smell of fresh dill though. I had a large bunch of it soaking in a water glass by the window earlier in the week, and we didn’t use it all for the pickles. I decided to let it sit there for awhile, basically just treating it like it was a bouquet. Chunk didn’t even knock it over, although he was intrigued by it. After a few days of enjoying the aroma, I accidentally bumped it with a pan while I was washing dishes, and a huge swarm of fruit flies detached from it. I was all, really? Enough with the F’n flies already (and to the kids reading this, the “F” stands for fruit. Really.) 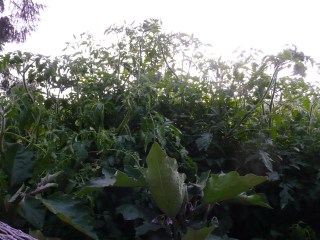 Apart from the swarms of flies, the Tomatonator and the strawberry patch are the other two things that are rapidly growing larger. Perhaps I’m supposed to be pruning the tomatoes? One end of the Tomatonator has assimilated an eggplant almost completely (Borg reference, anyone?) It’s almost to the point where if you stand on the far side of the garden, you can’t see the house. And granted, there’s a bit of a slope, but still. It’s a little disconcerting. It’s like a scene from that show on the Discovery channel that shows what cities look like after all the people die off. It’s that big now. I’m going to have to rent a Rototiller when it comes to turning the garden under for the winter. By the way, the large leafy plant in the front of the Tomatonator is an eggplant, otherwise known as the next victim. Resistance is futile. 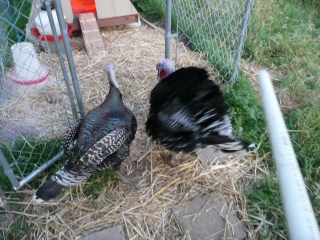 And speaking of total domination, I’m going to market my turkey herding stick. Right now it’s just a piece of PVC pipe, but once I bedazzle it, or glue tassles onto it, I’m sure it will sell quickly to today’s fashion farmer. So far, they are still respecting the stick. I’ve included a picture of it – the turkey is blurry because he’s moving that fast. If you want the real experience of turkey herding, stare at the picture while saying repeatedly, in a high pitched voice, “please don’t bite me please don’t bite me please don’t bite me.” Welcome to my world.