I’ve decided that since this blog is no doubt read by millions and millions, I can do better than just a boring old date title when I’m writing it. It’s kind of a work in progress, so I welcome any feedback. I’m also going to try posting more often, because I have a lot of fun writing these. I hope you enjoy reading them as much as I like writing them!

So the turkeys have decided they no longer need to respect my authority, much like every other critter in this household. I now have to employ my “turkey mover” stick, because they won’t go to bed when they’re supposed to any more. The female just sits on the ground and refuses to move, and the male puffs up and shifts his weight from side to side, just glaring at me. It’s like he knows I’m too scared to pick him up. I can always tell when he’s getting ornery, because he starts breathing really really loud. It’s the creepiest thing ever – you can hear him from three feet away. I wouldn’t be at all surprised if he suddenly said, “Luke, I am your father.” It’s that loud. I’m really worried about what I’ll do when they no longer respect the stick. It’s a four foot length of PVC pipe, and I use it to herd them where I want them to go, while conveniently staying out of harm’s way. They have definitely become teenagers, and they’ve even fell in love with each other. It’s all Wild Kingdom now, if you get my drift. It’s like a trainwreck — you can’t not watch, because it’s so indescribably weird. I’m so excited for turkey eggs, though! I want to raise a turkey chick – we can name it Easter!


Along the subject of eggs, I think the next addition to the farm needs to be quail. I’ve given up on the miniature horse idea (because really, that’s no different than Buttercup), and I’ve reluctantly given up on the potbelly pig idea. Reluctantly. But quail are so small and cute, Gene can’t possibly object! And, they’re always raving about quail eggs on Top Chef, and they cost like $10 in the store, so I’m totally not seeing a down side to my plan. They also have three times the nutritional value of chicken eggs, despite being so small (I learned that from a cooking show last night, lest you think I’m wasting my time watching TV). 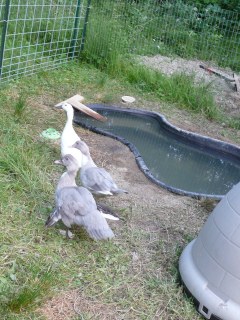 I want to try eating the duck eggs, too, although it will be a few months before we have any. And I’m a little worried that the special Bedonaduck is male, so we’ll have fertilized eggs to deal with, but I’ll worry about that when it happens. (Gene is totally going to crack the first one open, though, unless he wants to see some drama). I’m going to have to start changing the water in the pond more than once a week, because they dirty it up with a quickness. I also desperately need either a pump or an assistant, because damn. I’m tempted to wear my gas mask from work when I bail it out; it’s a little ripe. It’s also hard to throw the water out of the bucket, because if you throw it in the wrong spot, it drains back into the pond. (That was ten minutes worth of “why the heck is the water level staying the same??? before I figured it out). The other thing you have to watch out for is the metal post that’s right in front of where I bail, because if you hit it with the water, half of it comes back in your face. I learned two important lessons today: 1) wear sunglasses and 2) bail with my mouth shut. I’m totally going to buy a pump tomorrow.

Aside from dealing with murky pond water, the only other true challenge on the farm is the Tomatonator.  It’s over five feet tall now, and has started to consume one of my eggplants. I can no longer see my beets or carrots, so I fear the worst. I think it’s turning predatory – eggplants, beets, and carrots today, deer tomorrow. Condi won’t even go near it any more. She’s the chicken that has figured out how to defeat the fence surrounding the garden. I finally figured out how she does when I was weeding today. She finds a spot where there’s an inch gap between the ground and the bottom of the fence, then she flattens herself out and crawls underneath, like a reverse limbo. I had no idea chickens could flatten themselves out like that. It was weird to see, because she literally looked like a feathered pancake while she was squirming underneath. I think next year I’m going back to putting the tomatoes in containers. Either that or I’ll grow a privacy hedge of them across the front yard.