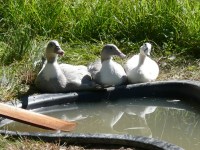 The Bedonkaducks are loving their new home, especially the pond. They’re treating like a timeshare; they lounge poolside all day long, and lodge loud complaints when I have to close the pool for maintenance. The water got dirty amazingly quickly, so today I emptied out half of it and replaced it. We really need to invest in some sort of pump, because doing it with a bucket got old fast. 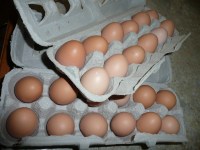 The chickens finally noticed the ducks, and now they hang out on the other side of the fence, right across from the pool. They look like they’re trying to sneak into some fancy country club. I asked Gene to make a pool for the chickens, too, but he just glared at me. I think the chickens deserve one – we’re up to a record six eggs per day now! I think one of them only lays an egg every other day, and it’s three times the normal size. 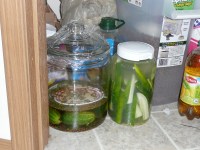 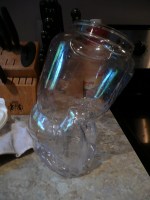 I harvested cucumbers and zucchinis again today, and got a zucchini even bigger than the one I was bragging about yesterday. I’m going to make zucchini pickles tomorrow, when Gene is around to supervise. He usually prevents me from doing stupid things, like trying to sterilize a plastic container with boiling water. Which I did, again, tonight, when I was making my second batch of pickles. I guess I forgot you can’t do that with plastic, I was just following the recipe. My first batch of pickles was an epic fail — you should never use the description “congealed brine” when talking about pickles.I have no idea what went wrong, but yuck. I’ve never done the “salt brine” method before, but I figured I’d give it one more chance, and I had extra cucumbers that I’d just harvested today. 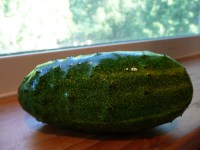 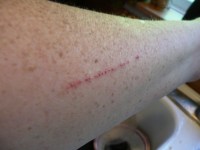 Apparently I managed to grow the only type of cucumber that’s actually capable of defending itself when you harvest it. There were maybe 8 little ones on the vine that were the perfect size for pickling, so I started cutting them off the vine. I was holding them in my arms, when all of a sudden I felt a burning sensation when I shifted them. I looked down, and realized one of them had scratched me. When I examined the cucumbers closely, I realized they had rows of spines on them! Nowhere on the seed packet does it say “harvest with caution” or “sea urchin variety”, so I was kind of annoyed. I had to scrub all the spines off before putting them in the brine, because that would really suck to bite into a spiky pickle. The spines in the picture don’t look big, but keep in mind that was after I’d scrubbed it with a towel… the black things are the base of the spines, and I had to dig each one out. I’m kind of tempted to leave one on the vine, just to see how long the spines will grow! 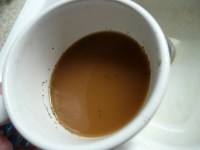 My stevia experiment also worked out fairly well. I dried the leaves of it, and when you crunch them it takes just like sugar. If you’ll remember, I was worried about how to process the dried leaves into a form you could actually use. I ground them up with a mortar and pestle, and it turned into a fine green powder. I am really curious as to how they got the stevia in the box I bought from the store to turn white. I put some of the green powder into my coffee, and while it tastes good, appearances are another thing entirely. The powder kind of floats on the surface. Good thing I’m not picky about my coffee. (And seriously, with as many pets as we have, if you get coffee without floaters in it, that’s a good day.)