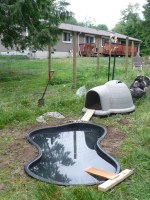 Exciting news on the farm today! The Bedonkaducks took a look at everything on the market, and finally settled on an Inuit-inspired chateau, with lake access, of course. They moved in this afternoon, and had their very first swim. (One might say they took to it like a duck takes to water….) 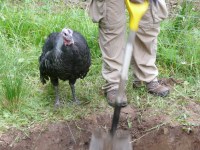 Digging out the area for the pond proved to be challenging, mostly because there were two goats and two turkeys all competing to be job site foreman. The turkeys decided they wanted to oversee the excavation process, so they put on their little white helmets and parked their butts literally right behind Gene and Travis, who were trying to dig. They wouldn’t move for anything, no matter how close the shovels full of dirt came to their heads. The goats were marginally more helpful, as they actually got into the pit and tried to help move dirt. They had the annoying habit of head butting people into the hole though, always when you didn’t see it coming. 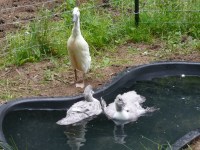 We finally got it finished and filled up, despite all the extra help. Gene built little ramps into the Maison de’ Bedonkaduck and into the pool. He did a temporary fence around the ducks area, just so they can get used to their new home, and to keep the curious goats out of the pool. Once they get used to each other, they’ll be fine. Little Buttercup was a little puzzled by the ducks at first – you could tell because she had her “I’m a startled goat” Mohawk going. I also wanted the ducks to be able to enjoy their first swim in relative peace. 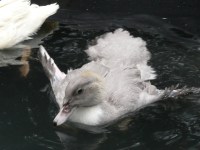 I’m still a little concerned about our special Bedonkaduck, because it still seems like his wings grew in upside down. He can swim fine, and flap them fine, but they just look so strange. It gives him a most un-ducklike profile. He also has an unfortunate hair style, so I don’t think he’ll be much of a hit with the ladies. The other two seem totally normal, although we thought we were buying all three of the same kind, but much like Michael the rooster, somebody missed the memo.
Now that the brooding box is empty again, I’m totally going to buy more chicks. I’d like to keep our flock at 12, and we are at 8 right now. I just hope we don’t get another errant rooster… I’m not sure the neighbor’s landscaper would adopt another one! 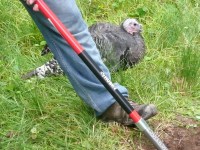