One of my many favorite signs of spring is the very first time I hear the frogs start to sing. Their chorus started up two days ago – much to Gene’s annoyance. It’s not that he doesn’t like frogs, he just doesn’t like when I “scare the hell out of him” by banging on the bathroom door and telling him all about my latest discovery. 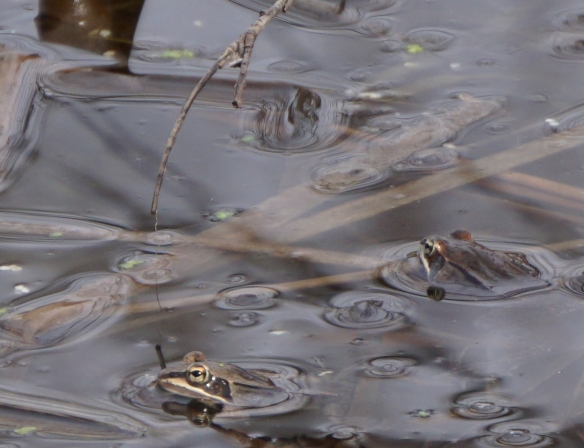 I’m supposed to wait until he’s had his first cup of coffee, but in my defense, this news couldn’t hold  – my Polly Rescue Project was a resounding success!!! If you’ll recall, Jennifer and I re-homed hundreds of tadpoles from their stock tank to a Tadpole Sanctuary that I created out of a huge bucket. It was well stocked with algae, aquatic plants, and tadpole pellets I got from the pet store. They literally wanted for nothing, except perhaps more positive affirmations from Gene (but he was adamant that only loonballs talk to tadpoles – proved him wrong!) When the weather started to turn in the fall, I released them into the pond where the plan was they’d hibernate over the winter by burrowing into the thick mud.

It worked impressively well – there are HUNDREDS of frogs now, and there were hardly any there last year. It’s a very Zen experience to watch them – they just hang out, waiting for a lady frog to fall under their melodic spell.

And that’s not the only place where romance is in the air. The last time Gene dragged me into WalMart, I noticed they had some Mystery Snails in what passes for their aquatic pet department. I figured they’d make a great addition to Yandu’s tank, and help out with the algae problem. 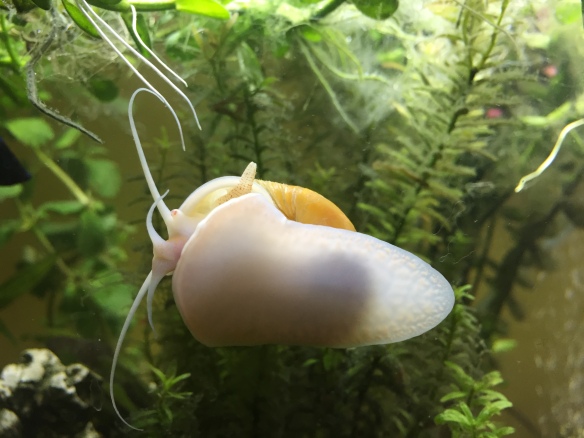 I had no idea snails were so magnificent. First off, they’re huge – especially the golden one, whom I’ve named Bentley. (Gucci and Ralph are both a pleasing shade of mahogany, which Gene insists on calling “brown”.) They’re surprisingly fast, and they LOVE to “snuggle”. Not that I stare at them, that’d be creepy. I’m just happy that they’re happy.

So signs of life, love, and spring are all over the place around here. For starters, I took the Christmas wreath down yesterday. I don’t care what Hallmark says – that’s the first Official Day Of Spring as far as I’m concerned.

Gene also brought out both the hose and the kiddie pool, which the geese were ecstatic about. Higgins took one look at what Gene was carrying and started to do a happy dance. They didn’t even wait until it was full to hop in and start splashing around. 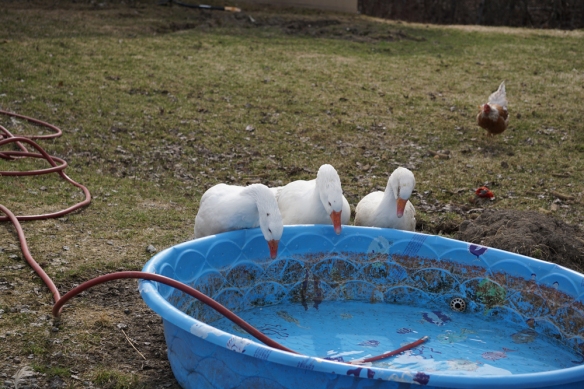 And here’s incontrovertible proof winter is behind us – I saw 2019’s first butterfly. This year it was a Mourning Cloak, which is an absolutely terrible name for a butterfly. Whoever came up with that one should be fired. That’s like looking at a beautiful Monarch and being all, “hmmm… how about ‘Orange Death Shroud?’ That kinda fits…” Mourning Cloak indeed. 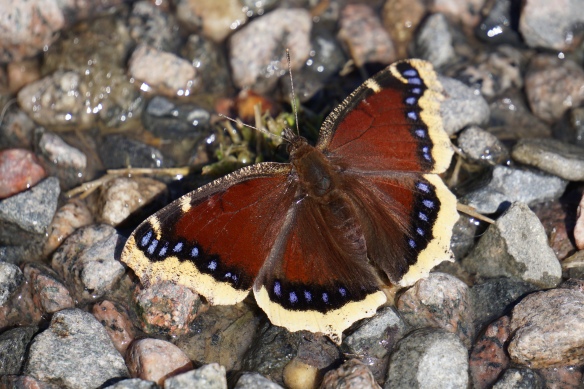 In other exciting news – I’m a legit logger now. What’s changed, you ask? I have now single handedly skidded a huge cedar tree out of the woods. Well, technically Alan cut it down, and Gene wrapped the line around it, but I’m the one that drove the tractor *and* pulled the string that made the winch reel it in. Ergo – legit logger. 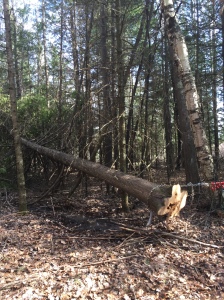 I’ve skidded out over 10 trees now, and Gene only had to remind me once that real loggers don’t scream. Even when the tree gets hung up on other trees and the tractor gets yanked up onto one wheel, apparently. Personally I thought that if ever an occasion called for screaming, that was it. But thanks to my cat-like reflexes, I immediately disengaged the winch upon seeing what was transpiring. I know from a distance it probably looked like I quit pulling on the rope that runs the winch because I dropped it in sheer panic, but that totally wasn’t the case.

Besides, I didn’t scream today in a situation that would have made lesser loggers tremble in fear – a tree fell a mere 20 feet from my head. As I was preparing to pull the string, Gene was all – “Hey, look up to make sure a tree isn’t falling.” What he neglected to mention was what I should do if said tree falls toward me – since I’m perched on a tractor that’s attached to another tree. Like hitting the gas and zooming out of harm’s way is off the table, and let’s just say I’m not renown for my land speed. Sure enough, a tree fell and I calmly watched it come crashing down. That’s when I realized there’s a reason loggers wear helmets, and it’s not cuz they’re safety wusses. I’m kicking myself now – I can’t believe I missed a chance to accessorize. Gene needs to take me into town with a quickness, because I’m pretty sure helmets come in fluorescent pink.