We had freakishly warm weather today, which was a nice change from yesterday’s low 20s. Today hit 68, so we unpacked the hose and kiddie pool for the geese, and they had a blast. Gene said they were having so much fun it seemed unfair to deny them a pond all winter, which got me thinking about whether or not letting them into the bathroom for some tub time when it’s 50 below would work. Gene said absolutely not, but I’m sure he thought I meant all 3 of them at once. That would be silly, I’d bring them in one at a time.

The beautiful day was also a great excuse to do some tractor work, and I have to say I can’t believe we’ve had it for almost year and I’ve been clinging to the side while Gene drives it down the highway to the east fields. I could have been reclining in the bucket this whole time!

I figured that out when against Gene’s advice I opted to wear my favorite tennis shoes instead of muck boots while we spread straw over the honey and goji berries. He suggested I ride in the bucket on the way back so I could try and minimize the mud damage, and now I refuse to ride anywhere else. Not only is the view awesome, it’s a surprisingly comfy ride. I rather imagine the Troopers wouldn’t be too thrilled with my new favorite mode of conveyance, but I’ve only ever seen one on our highway so I’m not too worried. Besides, what do they expect me to do? Walk?

Despite the balmy near-70 temps, I thought I’d plan ahead for once and sketched out some plans for a warming station for the goats. My thought was if they had an igloo like area inside the barn, their body heat would warm it up and they’d be super comfy at night. Gene brought back some straw bales for me, and he set it up next to the milking area. As you can see, it’s got direct access to a sunbeam, climbing opportunities, and plenty of sleeping space:

And here it is an hour later: 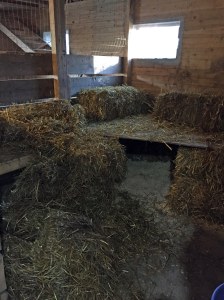 Sigh. Apparently you can’t give goats nice things. But at least we can use the straw to mulch things, which means more tractor rides for me!