So far we’ve released 7 monarchs, and there are 13 more chrysalises in various stages – plus at least 10 caterpillars still munching! I’m pretty sure I saw some eggs on the leaves too.

I’ve added “build an addition” to Gene’s summer to do list. He can even work on it right under the carport, as the overly protective pair of robins have moved on after their last brood fledged. 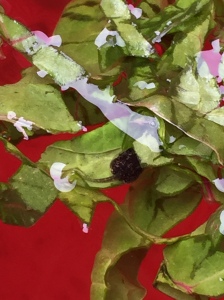 But monarchs aren’t the only species we’re giving an assist to – thanks to the hundreds of tadpoles my friend Jennifer discovered in her cow’s stock tank yesterday, now I’ve got a Tadpole Nursery!

There were way too many to survive where they were, so we moved about half of them to our house, where they now reside in a huge plastic bucket filled with rain, creek, and well water – in addition to as many buckets of trough water as Gene would let me put in the truck.

Today I gave them a handful of chopped up chard as a treat, and it was a huge hit. So as I’m dining on chicken tenders washed down with a rum & Coke, they’re eating leafy greens. I think we can all learn a little something from nature. 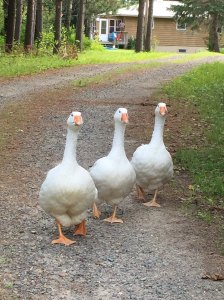 In other news, the geese have found a new favorite basking spot – on the front deck, directly in front of the porch door. Every time I go back into the house, they want to follow me. So they end up just parked there, soaking up the sunshine. The highlight of their day is when I take Ceri and Chupi to check the mail. I end up rolling 5 deep – with a 3 geese escort.

At any rate, I think it’s super cute that they wait for me to come out of the house. Gene, not so much. Instead of letting their love for us melt his heart, he chooses to focus on what they leave behind. Which, in all honesty, is hard to miss. Literally. You have to open the door then try to jump over 3 steps to avoid stepping in it.

I’ve added “hose off deck” to my list of daily chores. Gene got me a professional grade water wand thing that has a really powerful jet on it, and you’d think since my favorite side gig is pressure washing cedar logs I’d be a lot better at cleaning the deck. But since I went nuts with the potted flowers, it’s kind of hard to get a good angle on the piles. I found that out the hard way, when to my horror I pressure washed a huge goose turd underneath the porch door. Shudder. I bet the next time the porch hits 90 degrees I’m going to wish I hadn’t done that…