Let me preface this by saying I am an unrepentant Wattage Hog. Gene is forever grumbling about why I feel the need to leave every single light in the house on. When I tell him it’s because I’m a creature of the light, he responds that he’s a cave dweller, and marriage is all about compromise.

At any rate, I’m not known for my ability to handle service interruptions in stride. When I was in Washington, poor Abigail got a panicked text whenever the power so much as flickered. And I’ll be the first to admit that I did not handle the 6 hours during which our shared neighborhood well was shut off for maintenance with anything resembling dignity.

So of course, the power flickered the very first night at our house. Seeing the panic on my face, and probably wanting to prevent any sort of whining, Gene told me that 80-acre farm mamas aren’t allowed to be wussy. Then he helpfully pointed out that I was about to be on my own for 2 months, and added a spectacularly unnecessary “So suck it up, Buttercup.”

All that being said, no one was more surprised than me when I actually functioned during a 3-day power outage. Not to brag, but I crushed the whole self-sufficiency thing. I melted snow to flush the toilet, I fashioned an apocalypse lantern out of a strand of battery operated lights and glass vase, and I only flipped the light switches out of habit for the first 2 1/2 days. 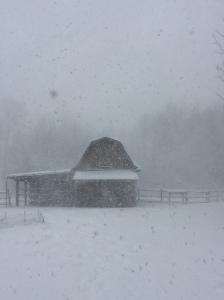 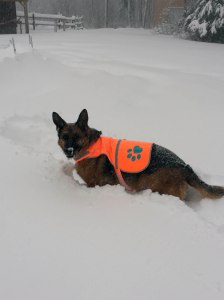 I spent most of the days playing outside in the snow with the dogs – all 4 feet of it (thus the power outage, it all fell within 10 hours). It’s hard to be stressed while watching Ceri have such a blast. She absolutely LOVES snow. She would play in it for hours if I let her. Her favorite thing to do is bury her orange Jolly ball, dig it up, then bury it again. She turned into a puppy again, it was so cute to watch.

Chupa, on the other hand, won’t be auditioning for lead sled dog anytime soon. I had to excavate a potty trail for him, and even then he’d just kind of stand there looking confused. But once he got used to it he went for a few zooms. Neither one of them had ever seen more than about an inch of snow, so it was brand new world.

In general, though, they handled the frigid winter temperatures fairly well. Ceri got a new blaze orange “Safe-T-Pup” vest that she wears during hunting season, because according to the locals every single person that comes up from the cities to hunt is a total asshat. The couple we bought the house from said they always wear something orange just to cross the highway and check the mail. The orange definitely makes her pop against all that snow.

Chupa got a new pair of booties, which he hates. He tries to walk without putting his feet down, then looks crushed when I can’t stop laughing at him. But his dainty puppy paws can’t take below zero temps – within about a minute he’ll be holding up his paws like they hurt. I even bought him a parka from Petco, which he rocks, naturally.

When it hit 30 below, I decided to try freezing some bubbles. Since no one around here carries bubble solution in November, I made my own with Dawn dish soap, karo syrup, and water. It was really cool to watch – they froze almost right away. As did my fingers. After about 5 minutes I could barely press the shutter button. But watching them solidify and fall out of the air was worth a little frostbite!