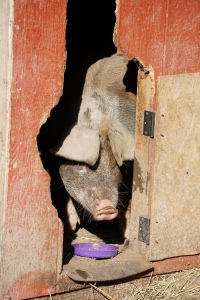 It’s official – fall is here. Watermelon treats have been replaced by pumpkins from the garden, which Gene helpfully throws off the deck so they blow apart in an explosion of yumminess. The only one who isn’t fond of pumpkins is Porkulous the Picky, ironically enough. Apparently there is something pigs won’t eat. He is doing well, and growing quickly. Big enough to break out of his pasture area repeatedly, actually. He digs his snout under the hog panels, then yanks his head up with sufficient force to drag the t-post out of the ground. It’s hard to be mad at him, though. He gallops around the yard with such gleeful abandon, making cheerful whuffling noises and running from one interesting thing to the next. I’ve taken to letting him out for an hour or so to explore the pasture, and he wanders back into his pen once he’s sure I’ve put a few treats in his dish. 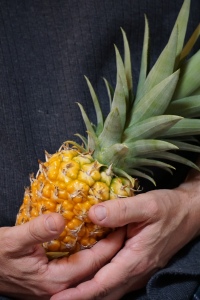 He has a fondness for apples, so every time one falls off one of the trees, I give it to him. Even though the trees are young, we’ve gotten quite the bumper crop. And I was ecstatic to see we got our first two pears, even though they’re approximately two inches long. Perfectly formed, but the size you’d find in a dollhouse. I’m assuming they’ll be more properly sized next year. But the most exciting harvest this year without a doubt is the pineapple. After two years, it’s finally ripe! It was also on the small side, but so tender and sugary and delicious. And I get to brag that I’m eating locally grown pineapple. How many folks around here can say that?

Most everything has been harvested from the garden now, so I opened it up for the chickens and ducks to rampage through. The Brussels sprouts are the most popular, especially with Woolimina. She can skeletonize an entire stalk within minutes. As soon as they’ve eaten everything, I’ll shut them out again and plant the cover crops for the winter. The only real failure this year was the delicata squash. For some reason, it never ripened. Apparently I got it into the ground too late. It looks beautiful and cheerful, but insides it’s colorless and tastes really bland. But it won’t go to waste – I cut them in half and give them to the chickens. Squash seeds are one of their favorite snacks. 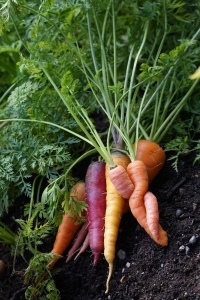 lready looking forward to what I’m going to plant next year. I’ve tentatively decided the shining star of the garden will be leeks. I got absolutely addicted to making potato leek soup this summer, and rapidly used up all the ones I grew. So next year I’ll need several more rows – at least. And we’ll need way more potatoes. I also discovered that kohlrabi is amazing when you roast it with olive oil, salt and pepper. I grew a ton of it, thinking I could sell it with my other produce at the market down the road. But apparently its bright purple, slightly squid-ish appearance frightens people. Good thing I like it so much! The carrots were a big hit, though, so I routinely sold out of those. I’m particularly excited about a variety I found to plant next year – they’re black! The seeds are from India, called Pusa Asita black carrots. It’s a new open-pollinated variety that’s jam packed with anti-oxidants, plus apparently it stains everything purple. How cool is that?