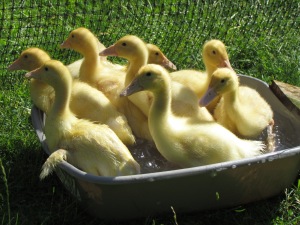 With the weather finally warming up, at least in the afternoon, the ducklings decided they needed a play pen in the backyard since it was getting so hot and stuffy in their garage brooding box. I ran some plastic mesh deer fencing between our existing fence and made a nice, sizable grassy area for them to play and lounge. I also added a feeding nook (since they eat a metric ton per duckling, per day, I swear) and a pool. When I texted the picture to Gene, who was at work, he immediately called and said that no ducklings of his were going to swim around in a litter box. Well, that’s not exactly what he said, but the upshot of the conversation was that he’s going to build me a custom pool! We have tons of scrap two by fours laying around, and an old pond liner, so he’ll be able to come up with something amazing. The ducklings whole-heartedly approve, because even though they can all fit in the litter box, there’s no room for them to actually swim.

I wish I could post an amazingly cute picture of the baby bunnies, but they still spend

the bulk of their time in the nesting box. Occasionally they’ll come bounding out and grab a lettuce or a Wheat Thin snack, but they’re so fast I can’t get an in focus shot! Plus, Cinnabun has a habit of getting between the camera and her babies. She clearly doesn’t approve of my paparazzi ways. They’re about the size of a hot dog bun cut in half, and so far I’ve counted eight. One of these days I’ll get a stunning shot and share it with the world. But for now, here’s a quick picture.