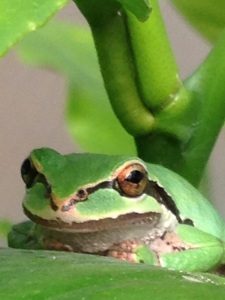 So in my last post I wrote that I hadn’t seen the greenhouse frogs in awhile. Apparently I just wasn’t looking in the right places, because the very next day I went in there and two of them hopped across my path. Literally, about waist high. Those froggies can get some serious air. At any rate, I was very glad to see Willard and Bromier. I know there’s at least one other frog, because one of them is a chocolate brown and I haven’t seen her lately. Plus, they tend to hang out in groups of seven or so.

This year’s Giant Pumpkin is already big enough that all the frogs could host a party underneath its leaves if they were so inclined. I

need to figure out a better place to grow it, because the corner of a raised bed only resulted in a 100 lb. pumpkin. I want to get far closer to the promised one ton; I think the problem is other farmers provide up to 300 gallons of water a day for it. I’m no geologist (or whomever it is that studies ground water), but I think that amount of water every day for the summer would drain our well dry. Not that it wouldn’t be totally worth it.

It’s too bad it’s too cold to plant anything outside yet, because with all this rain there’s at least 300 gallons of standing water in our backyard at any given moment. Most of the chickens come out of the coop for about five minutes every morning, just long enough to eat the scratch grain I put down for them, then they roost up for the rest of the day. Gene’s going to have to reinforce the roosting bars if they get any fatter.

Broody Mama and her five newly hatched chicks have it easy – they’re in the garage where it’s always 75 and sunny. Her chicks are really cute, but very camera shy. Even though I purposely let her sit on five different colored eggs, her chicks all look remarkably similar. I think Sean Paul’s genes are still haunting us.