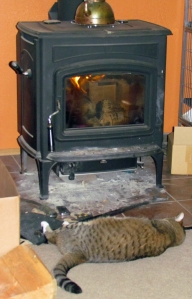 Clearly my New Year’s resolutions have already gotten the better of me (write more! post everyday!) I’d like to say that I took the entire month of January off in order to plan my Superbowl menu, but even with the inclusion of a signature cocktail – containing blue curacao, naturally – it only took a few minutes to decide on hot wings and lil’ smokies. (That was my contribution, Gene made his famous 7-layer dip). Mostly I spent the month of January curled up in my couch nest, drinking herbal tea, reading, and whining about the rain. I swear my brain just shuts down due to lack of sunlight.

Conveniently, January is the slowest month around here. The chickens hide in their 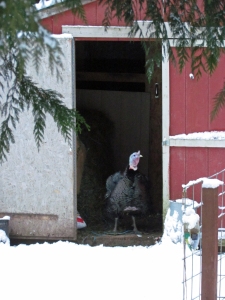 house, sleeping on their roosts for most of the day and only coming down for the occasional snack (apparently my winter apathy is contagious, I’m greeted by a bunch of fat, grumpy chickens every time I go out to gather eggs). Dimsworth and Hawthorne, also haters of all forms of precipitation falling from the sky, spend their day inside the storage shed. Their favorite dry napping spot means I have to literally hop over them whenever I come and go, which isn’t fun when I’m hugging onto three flakes of hay and a scoop of grain. I also have to shovel out each night’s leavings in the morning before I do chores, because anything that smells so bad in that enclosed space should be visible in the air. And that’s with the door left open all night! I imagine if I shut the door, the paint would peel off the walls.

The ladies, who are getting pretty big now, don’t seem to mind the rain at all. In fact, they’ve gone rogue, and now quite literally rule the roost. They sleep where they want(usually up in the trees), eat where they want (any feeder that isn’t theirs), and potty where they want (on our roof, really???? Our roof? Good thing it’s not December anymore, Santa might slip). I certainly don’t miss the nightly process of getting them into their chalet. I would open the door, prop up the “herding fence” to make it harder for them to run past the open door, then chase them in a circle around the kennel until they finally stagger inside to eat. On a good night, I only had to chase them once or twice around the chalet. On a bad night, I would race upwards of fifteen times around it, with the song “Here we go ’round the turkey chalet” going through my head over and over and over. And then I’d slip in Shy Shy’s latrine, which is conveniently located right behind the chalet, well within the turkey’s race track. The turkey revolution started the night I could only chase Temperance, Constance, and Hester inside. Prudence repeatedly flew onto whatever roof was nearby, no matter how many sticks I threw in her general direction. She finally flapped into the woodline, and I was worried enough about coyotes and such to go get a flashlight and spend an hour chasing her back into the yard. She finally settled down on the deck railing, which is where she stayed until Gene crept up on her at two in the morning, pounced, and hauled the enraged ball of squawking feathers into the chalet. The very next night, all four of them refused to come down from the roof, because if Prudence gets to sleep where she wants, why can’t they? I gave up. It’s four against one, and I don’t like those odds. 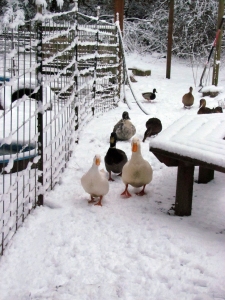 I really do love those goofy turkeys, though. Yesterday was their first experience ever with snow, and they were not loving it. They refused to come down from the roof until after noon; I think they were afraid to land in all that whiteness. Most of our chickens had never seen snow before either, and took one look out of their coop and refused to come out, even for treats. The ducks were the only birds that had a grand old time of it, happily digging in the snow with their beaks and sliding around. Ducks are generally happy anyway, though. They take great delight in wherever they find themselves. I really try to be more like the ducks during winter.