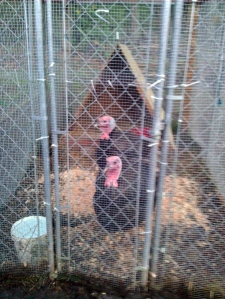 I never in a million years thought I would consider this, but we might be chowing down on Dimsworth and Hawthorne. Out of the blue two days ago, they both decided that Fiona is their nemesis, and have been trying to attack her ever since. And it’s not a casual, peck you in the butt because you chomped on my beautiful tail feathers either. Those turkeys go straight up insane the moment they see her, trying to claw her face with their talons. They won’t let up unless I physically drag them away. I’ve had to keep them separated during the day, with the turkeys outside the pasture and the goats inside. Then they get corralled in their feeding kennel for the night, which they hate. Keeping them outside the pasture works great when it’s not raining, but I don’t know what I’m going to do when the heavy rains come again. I thought about trying to sell them, but anyone buying a turkey around this time of year is buying it for one reason only – one delicious reason. I’ve poured so many loves and cuddles into them that if anyone is going to smother them in gravy and potatoes, it’s going to be me. As bad as I feel about the whole thing, I don’t want them to have a poor quality of life penned up somewhere, nor do I want them to spend their days terrorizing Fiona, especially since she’s pregnant. I don’t know why she doesn’t put the smack down on them, but she just tries to run away and they corner her against the fence. Since I have no idea what made them turn into gigantic butts in the first place, they could start attacking the other goats at any time, or more alarmingly, me. Sigh. They’ve left me no choice but to reclaim my rightful place in the food chain. Hopefully the next turkeys we get will be more peaceful critters.

In much happier news, and speaking of food, I have little baby mushrooms growing 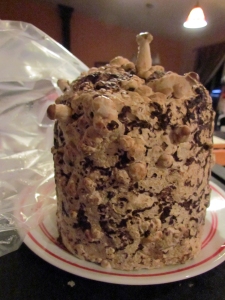 already! Gene isn’t thrilled with the big block of fungus taking up space on the kitchen counter, but I’m the one that lovingly mists it five times a day, and makes sure it has everything it needs. He also said the idea of intentionally growing fungus in the kitchen is disgusting so I should pick a different room to house it. Clearly he hasn’t looked in the refrigerator’s crisper drawer lately, this isn’t my first kitchen rodeo. The mushrooms should be ready to harvest in another week and half, so who knows. Maybe I’ll be eating fresh mushrooms on top of my fresh turkey. 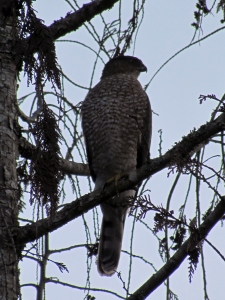 I’m not the only one dreaming of fresh meals around here, though. For the last two weeks, the critters have been terrorized by a hawk that keeps swooping down on them. So far the hawk has been unsuccessful, but I have a sneaking suspicion he’s the reason all of our baby chicks went missing a few weeks ago.  The Guineas are definitely earning their keep – at the first sight of the hawk, their usual screeching gets about 100 times louder. I’m not sure if the chickens are running away from the hawk or from their incessant noise, but either way, it works.

I was going to let the baby bunnies out for supervised play out in the grass, but I 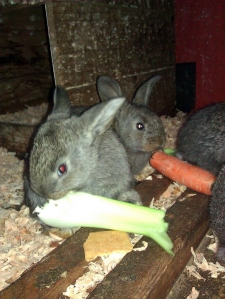 changed my mind thanks to the hawk. They are the perfect size for a raptor hors d’oeuvres. Cinnabun is an excellent mother – now that they are big enough to eat Wheat Thins and fresh produce, she lets me pet them all I want. All of them are incredibly curious, and none seem particularly scared of me. When I clean out their cage every few days, their favorite game is to hop on the shovel and ride it back and forth while I try to scoop out the shavings. Even though it takes me about 30 minutes to clean their enclosure with all their help, I love playing games with them.