Since starting our farming adventure four years ago, Gene has grown accustomed to my interrupting his breakfast to ask for $500 to buy a micro-mini pot-bellied pig, or a trio of peacocks, or whatever else happened to catch my eye on craigslist. He doesn’t even humor me anymore by pretending to think about his answer before rolling his eyes and going back to his corn flakes. Not that he never says yes – after all, we do have an immense number of chickens, two turkeys, two guineas, an alpaca, a sheep, an ever-changing number of rabbits, six goats, and sixteen ducks. No one can say I’m not spoiled. While I’m prone to falling in love with anything and everything, Gene is much more reserved with his creature affection. Every once in 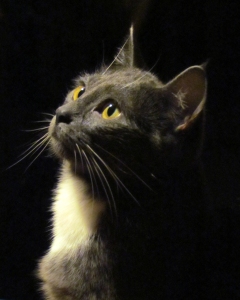 awhile he’ll come home with a tiny kitten (thus proving that lurking in front of a grocery store with a box advertising free kittens works like a charm), and on one memorable occasion he walked in the door after work with Raphael the rescue ferret. So when he came home from a trip to Petco yesterday, with tales of a Devil Crab that would climb out of its tank and into the neighboring one to snack on the delicious fish next door, I knew he was in love. Deciding that a house just isn’t a home without a thieving crustacean, I went to Petco today to surprise him by bringing home Lucifer.

When I got to the aquatic section and inquired about the Devil Crab, the employees eyes lit up. She said they had gotten three of them in two months ago, two of which had

sold on the first day. She then spent the next two months chasing Lucifer out of whichever tank he felt looked most delicious at the time. His favorite snack seemed to be the glow fish, which retail for $10 a pop (kind of ironic, considering Lucifer’s personal price tag was considerably less). A few people seemed interested in him, but then changed their minds once they learned he had special needs to be accommodated, such as a climbing ramp so he could breathe air every now and again. And the ramp couldn’t be to either side or the back of the tank, since then he’d presumably climb out and snack on a pet cat, or steal beer out of the fridge. No, the ramp had to be smack in the middle of the tank, which doesn’t seem like a deal breaker to me, but people are weird. Now, there’s two kinds of people that shop at Petco – people that know the basic requirements of their pets and get the bare minimum, and people that get the bare minimum, plus anything else that the pet could possibly ever need or want at any given stage of life. Guess which camp I’m in? I followed the employee around, stocking up on crab climbing toys, crab treats, and crab food, and I’m willing to admit that if she told me Lucifer needed an underwater exercise wheel, my next two questions would have been which aisle and what are my color choices.

Believe it or not, scoring an amazing crab for the tank wasn’t the only good thing to happen today. Cinnabun had her litter this morning! I will post some pictures in the next few days, I don’t like to shove a camera in their faces when they’ve been in the world for less than 12 hours. It seems rather rude.