So despite the absolutely gorgeous weather we’ve been having for the last few days, things have been pretty crazy around here. During the windstorm last week, poor Shy suffered a pretty catastrophic eye injury, and we had to call the mobile emergency vet. After handing over roughly the same amount as our car payment, I got eye drops to treat the infection. For the first two days, I had to administer them every two hours. The vet said that I didn’t have to give them at night, but if I did, Shy had a much better chance of keeping his vision. Naturally, I set the alarm to go off four times during the night, and administered the meds like clockwork. A few of my friends noticed my zombie-like appearance the second day, and when I explained what was going on, they said it was just like nursing. Which I guess it is, if nursing involved putting on muck boots and chasing your baby around the pasture at two am. Now that it’s been a few days, I only have to give the drops every three hours between 7 am and 10 pm, but there’s two different kinds now that have to be given 30 minutes apart. It’s going to be awhile before I can leave the house for any length of time, but the upside of the whole experience is I learned Shy loves ear scritches. After I get done with the drops, I let go of his halter and scratch behind his ears, and he leans into me and shuts his eyes. It’s quite sweet.

strong bonds with the other critters, most noticeably Woolimina. The first few times I had to chase Shy around the pasture, Woolimina tried to protect him by running along side him and generally running interference. She would make quite the linebacker, I should buy her a football. I was amazed how upset she got when she thought Shy was in distress, and after I’m done she always lays down right next to him and gives him cuddles.

But it’s not all frenzied chases around here, when I’m not medicating recuperating alpacas, I open the gate and let everyone come out and enjoy the sunshine. Dimsworth and Hawthorne particularly love their freedom, and more than anything they love following me around the yard, helping with whatever project I’m doing. I think I created a couple of monsters by hand feeding them Wheat Thins, and now they come barreling up to me demanding treats the minute I step off the deck.

I’m used to doing the chicken dance when I walk through the yard, hopping and jumping 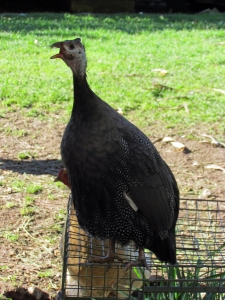 to avoid stepping on any toes while making my way to the treat bin, but I must say the sight of two huge turkeys rushing up to me is still disconcerting. Even the guineas mob me, and they have the horrible habit of springing straight up in the air just as they catch up to me. I’m really glad we got Vinni and Luigi, loud as they are. They are great guard birds, screeching and hooting whenever the falcons and eagles fly overhead. Now that they’re a few months old, their bodies are getting big, but their heads aren’t catching up. Even though they aren’t the prettiest critters in the yard, they’re always joyful as they go about their business.