Apparently Daisy felt we were discriminating against goats of a certain height here on the farm, and she was tired of having to lay down to look out the door of her bedroom. She took it upon herself to brush up on her contracting skills, then she installed a modified door, thus enabling her to reflectively chew her cud while taking in the sights standing up. As an added bonus (no doubt part of her overall design plan), the new configuration allows for two goats at a time to enjoy the view, as long as one of the other goats is short.

In other critter news, Lucky Duck has literally flown the coop. I figured his departure was 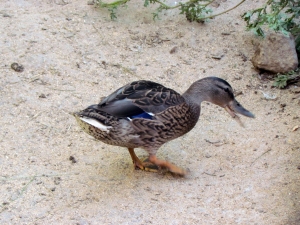 imminent when I saw him teaching himself to fly, then practicing loops and circles around the pasture. Watching him learn and practice was really cool, even though in the back of my mind I was a little sad because I knew it meant he wasn’t planning on staying permanently. Still, though, how many people can say they found a duckling in their driveway and raised it to independence? Lucky Duck definitely had a guardian angel that dropped him off at our farm.

I didn’t realize it was a nest until it started hissing at me.

Although I miss him, more ducklings should be hatching soon from underneath their broody mama. I finally found the duck I originally thought the fox had gotten – it’s incredible how well they can camouflage themselves. She has been brooding on a whole clutch of eggs, literally five feet away from the duck enclosure. Since I don’t know when she started brooding, I’m not exactly sure when the eggs will hatch, but it should be soon. Depending on how many ducklings come into the world, we may have to enlarge the Duck Mansion. But I’m not worried – I figure if Gene’s too busy, we can hire Daisy to do it.