A few scant days ago, I was watching a cooking show and wishing I had my own fresh cheese to use. Now, thanks to Abigail’s craigslist addiction, we have a milking goat! Gene didn’t even bat an eye when I told him we needed to add a milker to our collection, he just sighed and asked when and where. We trekked out to Bainbridge Island yesterday, and came home with Daisy! Her owner said she was bred in late September, so if she’s pregnant she should kid at the end of the month, and then I can start my cheese project! 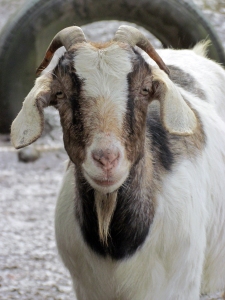 Daisy fit right in with a minimum of fuss; Shy was the first to officially greet her with a nose bump, then she toured the facilities. She particularly likes climbing on the deadfall in the back of the pasture. Oddly enough, the only one to start a headbutting war with her was Ursula. I think that’s because Daisy tried to nap in Ursula’s favorite stall corner, though.

Daisy wasn’t the only introducing herself this week, though. After walking outside and seeing Harvey cavorting by the rose garden, I figured it was a good time to clean out little Cinnabun’s room in the Bunny Ranch. Actually, I shouldn’t call her little any more – she’s catching up with Harvey remarkably quickly. I distracted her with an apple treat, then mucked out her area. I turned my back for less than a minute to grab the pine shavings, and I heard an 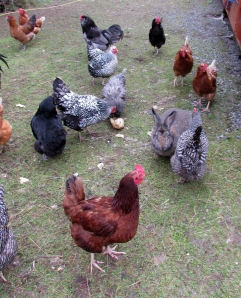 obnoxious cry of “Heeeeeey, baby!” I turned around just in time to see Harvey, who had appeared out of thin air, jump up into her room and introduce himself in a most socially unacceptable way. Granted I’m not the most observant tool in the shed (in fact, when I tell most people I used to be a detective, they think I’m telling a joke) but I can’t believe a 40-pound bunny snuck up on me like that. I also can’t believe he can heave his bulk three feet straight up in the air. Apparently all those Wheat Thins gave him super powers. He was mightily disgruntled when I interrupted his fun, but he’s got to wait another two months at least before Cinnabun’s old enough to date. And he’s got to buy her dinner first.