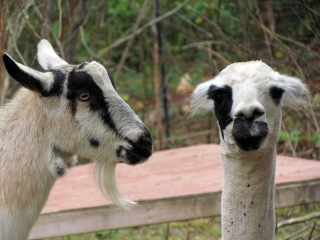 Have you ever found yourself trying to remember if it’s lamas or alpacas that spit? Turns out, they both do. And alpacas have freakishly good aim. I’ve had a lot of luck convincing Shy that it’s safe to come over and eat grain or hay out of my hand, but somehow he always knows when I’m about to grab his collar and the chase is on. Mostly I’ve had to grab him in order to adjust his blanket, since either he or a pesky, jealous goat keeps chewing the straps in half. Usually he gives up pretty easily, but sometimes I have to enlist Abigail’s help. The two of us then slowly back him into a corner, and then he just gives up and allows us to hold him. If we’ve chased him too long, or bothered him too much, Abigail and I learned the hard way that when Shy starts burbling like an old Mr. Coffee machine he’s about to launch a counterstrike. Now when he starts percolating, we know to duck.

I’m not sure if it’s the changing weather or what, but contrariness seems to be contagious this week on the farm. Last night, I watched Harvey hop back into the Bunny Ranch after a hard evening’s partying, so I went inside and got him his usual bedtime snack. Fearing he might get tired of Wheat Thins, I added a fingerling potato from the garden. There’s a trick to delivering Harvey’s bed times treats, since it’s dark outside and hard to see the spiders who cohabitate with him. If you turn too far to the right after entering the Bunny Ranch, you walk into Horatio’s web, and too far to the left will bring you face to face with Esmeralda, who is about three times Horatio’s size. When I bent down to deliver Harvey’s treats, I took my eyes off the bunny for a split second to make sure my butt wasn’t backing anywhere near Esmeralda’s spacious abode.  Either Harvey got tired of waiting for his crackers or he mistook the base of my thumb for his potato treat, but ouch. That bunny can bite. At least he let go right away, unlike Claire, who used to hang on for the ride. 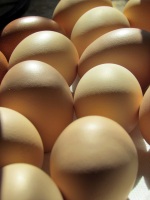 Harvey has also taken it upon himself to excavate various tunnels throughout the greenbelt behind the pasture area. He’s strong enough to actually bend fencing, and has done so in numerous places. If you listen to him in the woods, he makes so much noise if you didn’t know any better you would start wishing you were loaded for bear. He also hollowed out an area underneath the circular composter, which got overrun by blackberries this year. He ate his way underneath it, which caused a sort of vaulted area to form. Not content with just the area underneath it, he excavated all the way back into the brambles. Since the composter was strategically placed next to the compost pile, one of the chicken’s favorite bug hunting areas, guess where they’ve started laying? I haven’t been able to reach the pile of eggs I’m suspecting is back there somewhere, but I did see a chicken crawl out of the tunnel making what Gene and I call “egg screeches”, which is their proclamation to the world that an egg has just entered it. For the last few weeks, I’ve noticed that I haven’t been collecting any tiny sized eggs from the nesting areas. I just figured that the eggs were getting larger, but now I’m worried there’s a huge clutch of them in the bramble tunnel. Gene’s going to have to let me know what he finds in there.