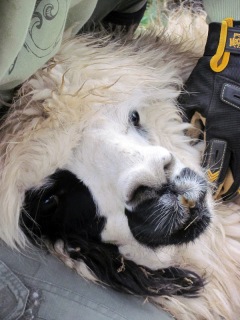 Today was makeover day here at the farm! I spent the entire last week making phone calls to find a shearer for Shy, and his new stylist came over this morning. She needed help holding him during the haircut, so I had to wake poor Gene up at the crack of dawn to manhandle the alpaca, since I’m fairly useless in the holding on to stuff department. Shy spent the early morning hours perusing the fashion magazines, and finally decided to go with a completely shorn look. Since he has a brand new, happy place to live, he wanted a brand new look to go with it. The whole grooming process took about an hour, since Shy had three years worth of wool, toe nails, and teeth to get rid of. Alpacas have similar teeth to horses, in that they keep growing. Poor Shy’s teeth had never been taken care of, so he couldn’t eat right or move his mouth properly, and his nails were so long in back he walked funny. The clasp on his collar had actually rusted shut, and it was so matted into his coat that we would have had to cut it off anyway, even if the buckle worked. The people that we rescued him from insisted that we return the collar, so I’m going to mail them the pieces of it, along with a photo of me hugging a happy, content, taken-care-of Shy and flipping off the camera. Gene picked out a brand new, wide purple collar for him to wear, and I think Shy actually tries to show it off, he’s so proud of wearing something new. 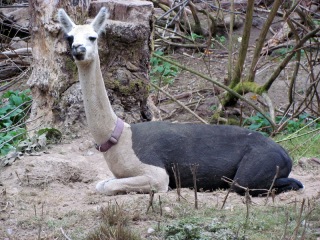 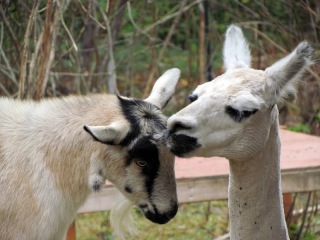 Even though I couldn’t help with the shearing, it was still a fascinating process to watch. The shearer tied ropes around his front and back legs, then stretched the ropes between a tree and a post while Shy lay down. He didn’t seem to mind it overly much, since lying down is the alpaca’s go-to stance when confronted by a threat. Gene held his head while she cut off enough wool to make it look like a woolly mammoth spontaneously molted in the backyard. Shy being our first alpaca, I was totally unfamiliar with their anatomy, especially when it’s uncovered by three years worth of fuzz. As soon as he stood back up, it became readily apparent that he is still intact. His equipment, as it were, looks disconcertingly human in both size and appearance. He also has a distinctly separated butt, topped with a disturbingly rat-like tail. Seriously, looking at him from behind is unnerving. The shearer said most people leave the wool on the tail, and now I know why. I’m considering sewing him a pair of pants.

At any rate, Shy is a completely different alpaca after his beauty treatments. The goats and sheep barely recognized him when he went back into the pasture, and he walks and eats normally again. He seems much, much happier. 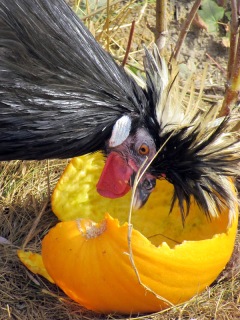 In other farm news, you can definitely tell at a glance that fall is already upon us. Summer’s scattered watermelon rinds have been replaced by pumpkin husks, a treat which the chickens love. Watching them shove their entire heads inside to pick out the seeds is endlessly amusing, at least to me. Even the latest crop of young chickens flock to the pumpkins Gene chucks off the deck for them.

Since the weather is starting to turn, Gene finished building the new woodshed, which is really cool. Today I finished relocating the wood pile from the side of the house to inside the shed, a task which took forever, both because I had to do it one-handed and because I had chicken helpers. The only reason Gene let me anywhere near that particular project is because the wood is so dry each piece weighs about as much as balsa wood, although the merrily tunneling bugs added some heft. Each time I lifted a piece off the ground, the area was immediately filled with at least 15 questing, hungry beaks. I suspected that woodpiles were home to things other than wood, but wow. That was like an Old Country Buffet for the chickens. They have an amazing ability to twist their beaks into tiny openings and mine out the termites, or whatever delicacy dwells within. It gave me a great idea for a chicken exterminating business – I could just slap some diapers on the hungriest birds and let them loose in a bug-infested house.

And speaking of bug infested, I complain about this every year, but with fall comes the spiders. The hundreds and hundreds of yard spiders. I’m not sure if it was the drought, or the temperatures, or what, but this season spawned some monsters. I let them be, mostly because they have turned Battle Fly increasingly in my favor. Most of them have names, as they tend to pick a spot and stay there, just getting bigger and bigger. I’ve found naming them makes them slightly less terrifying. Juan lives on one of the side gates, Henrietta dangles from the lamp illuminating the duck pond, and Michael is the reason I no longer, under any circumstances, go inside the chicken’s winter enclosure. 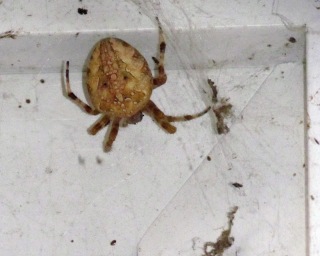 None of them can hold a candle to Nugget, though. Abigail chose that name for her because she resembles a chicken nugget in girth and coloration, and for this reason I’ll never eat a McNugget again. Nugget has made her home underneath the goat’s porch area, and spends her day clinging to the side of the window. I don’t think her web will support her weight, or she’s so lazy that she just waits for bugs to come to her. And she must catch a lot of them, because she’s like National-Enquirer-should-know-about-this huge. Every time I go out there I expect to see her snacking on a bird. I took her picture (you’re welcome, Bess Bess), but it doesn’t do her justice. I thought about asking Gene to hold up a dollar coin next to her, because her body is about that circumference, but I figured she’d just snatch the coin, throw it back at him, then demand his wallet. And if I were Gene, I’d give it to her, cuz damn.