The last few days here on the farm have been like a roller coaster – extremely high points and gut wrenching low points. I came home from work yesterday to find a weasel had chewed its way into the bunny mansion and attacked and killed poor Claire. I won’t tell you how, because it was horrible. There’s so much joy here that sometimes I forget nature has a terrible dark side. I was devasted. Something positive did come of it, though – Abigail, Gene and I have been bottle feeding her eight bunnies. That’s right, eight. Apparently Gene can’t count either. We moved their nesting box into the bathroom, and three times a day we pull it out, put it on the kitchen counter, and feed them kitten formula with eye droppers.

At first it was really hard, but now they’re getting used to be handled and fed, so it’s much easier. We’ve nicknamed them the popcorn bunnies, because they hop all over the place when you reach in the box. Once each one is fed, it goes in a plastic crate until feeding time is over, then everyone goes back in the nesting box. The bunnies range from fist-sized to so tiny they’re difficult to hold. One thing remains constant no matter their size though, they contain an insane amount of pee. Once the flow starts, it doesn’t stop. I’ve gone through more shirts, bras and towels in the last two days than in the entire previous month. Once we get them litter box trained, they’re going to be great house bunnies for someone. They’re totally used to handling, sniffing dogs, and curious cats. It’s going to be really hard to part with them, and signing an “I promise not to eat the fluffy bunny” pact will be a must.

In other momentous farm news, we got a pig! He’s about 25 pounds, and was originally named Baconator. We got him from a farm up the street and we went to pick him up on Friday. Since every other pig I’ve ever purchased came wrapped in cellophane and in bacon form, I was totally unprepared for transporting a live one. My cardboard box full of straw clearly wasn’t up to the task, so we ran back home for Ceri’s dog crate while the seller corralled the piglet. When we got back, he was sitting on a rock in the pasture, smoking a cigar and holding Baconator by his back legs. He then walked the pig to the crate, exactly like a dad playing that “wheelbarrow” game with a child, and swung the pig up into the back of the truck. The pig, while obviously not liking the whole walking on his arms thing, didn’t put up too much of a fuss, so I was looking forward to a peaceful day of watching Baconator frolic happily in the pasture.
We got him home, and Gene put his crate in the front yard while I ran to the store for hog food. I got home to find Gene holding a lasso in one hand, and pointing into the bushes with the other. He said I hadn’t locked the crate door when I put water and treats in it before going to the feed store. He averted the crisis by lassoing Baconator when I spooked him out of the bushes; I was quite impressed because he got him on the first try. Getting Baconator back in the crate was a bit of a challenge, but eventually Gene won. We went back to putting the finishing touches on the Swine Estate, which consists of a strand of electric fencing encircling a pasture area. When Gene went to get the crate, he realized it was empty. The door was locked, but no Baconator. Apparently he’s some sort of Houdini pig. We searched for literally hours, but couldn’t find him. Gene suggested that I start calling the neighbors to see if anyone noticed a piglet running down the road, but my mind fast-forwarded to six months from now, when an 800 pound feral hog is terrorizing the neighborhood, ripping up gardens and snatching small children, and I decided perhaps it’s best if no one knows who lost the piggy. 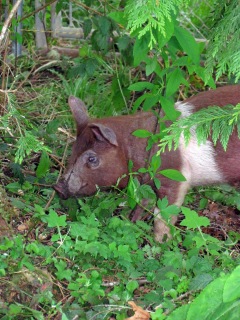 So three days later, Gene is getting ready to go to work and sees Baconator running through the backyard. I was ecstatic, because I figured we’d basically catered a luau for a coyote family. I got home a few hours later, and saw Baconator rooting through my raspberry patch. I waited until he nosed his way into the chicken coop, attracted by the same yummy feed that the goats love, and then I slammed the door. My euphoria quickly changed to thoughts of, “Oh, crap, there’s a 25 lb pig in the chicken coop and Gene’s at work all night.” I did the next best thing, which was call Abigail. She came down, and made the initial mistake of thinking Baconator was just a cute little piglet. She went in the coop, after telling me to shut the door so he couldn’t escape. I did, and almost immediately the sounds of a championship pig wrestling match filled the coop. I didn’t get to see any of it, since I was too scared to open the door, based on the fact it was all I could do to hold it shut – that 25 lb pig felt like a full grown bull trying to knock the door down, but Abigail said Baconator’s first escape attempt involved jumping up (and hitting!) the glass window three feet off the ground. When that didn’t work, his tactics changed to charging straight for her. She was able to grab his ears and hold him, but we both figured out that I was pretty much useless for pig wrestling. We called her husband and I dragged Ceri’s dog crate outside and put it in front of the door. When her husband got there (after five minutes of Abigail doing all she could to prevent Baconator from taking a chomp out of her legs), they were able to shut him into the crate. Abigail then renamed him Satan, and today Gene, Abigail, and two more friends erected the new and improved Swine Estate, which is two strands of electric fence and chain link fence panels. After testing the perimeter repeatedly, and demonstrating that electrical shocks merely make him hungry, Baconator finally settled down into his new enclosure. He’s the first of the critters to actually sleep in the Igloo style dog kennel, and I’ve been bribing him with apple treats so that he doesn’t turn into an 800 pound feral hog. I’m hoping (and praying) that I turn him into a cuddle pig.