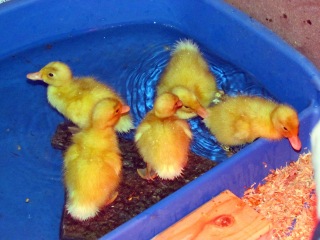 Finally, finally I have my ducklings! One of the feed stores that was still taking my phone calls agreed to put the last ducklings they had on hold for me; apparently I’m not the only one who was disgruntled with the USPS’s utter lack of service, because the ducklings sold in under a day when they finally made their appearance. Gene told me I could get four ducklings, so naturally I came home with five. In my defense, the store had five on hold for me, having heeded my screeching phone request of “OMG hold whatever you have left I’m on my way!!!” The store’s policy states that no one’s left behind, because there’s nothing more depressing than a lone duckling. 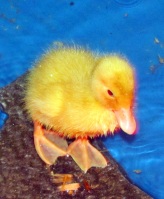 Once I got them home, they took a look around at the available housing options, and settled for the new addition to the chick’s brooding box. Gene had built it several weeks ago, and it was all ready for them, complete with wading pool. The ducks absolutely love it. They must spend 23 out of 24 hours in the pool, and protest mightily every time I take it out to replace the water. The chicks haven’t seemed to notice their new neighbors, which is a good thing, because Gene said there’s no way they’re getting a pool too. I got two Pekin ducks (which are the white ones with the bright orange beaks and feet), and three Indian Runners, which are the tall thin ones that always look like they’re facing into a strong wind. 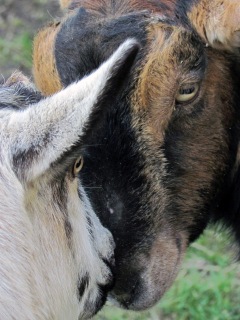 My friend Abigail brought Jack and Sam, her boy goats, back to our house while her family is on vacation. Now that the herd is six strong, feeding time is even more of a challenge. It’s like a moving obstacle course, with six critters all trying to be the first one to grab the grain scoop away from me. Poor Sam is still obsessed with Princess Fiona – the one goat he doesn’t have a chance in hell of getting with. It’s pretty funny – every time I look over at him, he’s gazing soulfully at Fiona’s rear end, which is waving about five feet above him. Although Princess Buttercup is his size (and his intended date), he has set his sights higher, literally and figuratively. Ironically, Princess Fiona and Jack have forged a bond, probably because Jack is fixed and is more into cuddling. Woolimina and Princess Ariel have adjusted nicely to their new surroundings; Princess Buttercup especially loves bounding around the pasture with Ariel. Despite her diminutive size, Ariel is actually the loudest of all the critters. If I come outside around dusk and don’t feed them right away, she lets loose with these ear-shattering shrieks that sound like she’s being attacked. I’m surprised our neighbors haven’t called Goat Protective Services on us… she’s that loud. Seriously, the noise is unreal. Not even Sean Paul and Marley can match her in terms of sheer volume. 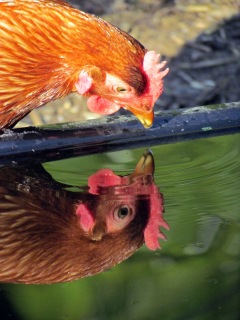 All the chickens were particularly happy today – although it was cold, it was bright and sunny. The six Golden-Sex Link chickens have finally conquered their agoraphobia, and free range all over the yard. They’re actually quite the party chickens, I have to chase them inside the coop every night even though everyone else has gone to bed. They’re like little kids; all they want is five more minutes. They have all started to lay eggs, but unfortunately they lay them in random places, like behind the feed bins and between layers of straw in the bales. Collecting eggs has turned into a daily Easter egg hunt. A few days ago I hit the jackpot – I found a hidden cache of 11! I’m not sure how to convince them to use the nesting boxes…I’m hoping they figure it out eventually.