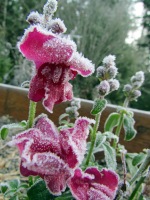 Hell has officially frozen over here at the farm… Gene is letting me keep a rooster in the house! Of course it’s just on a temporary basis; poor King Julian got to soar with the eagles yesterday…. until they dropped him. Our neighbor found him early this morning, and now he is recuperating in our master bathroom shower. He lost over half of his feathers, and was so shivering and cold from being outside all night that even Gene couldn’t deny him the luxury of indoor living until he gets better. 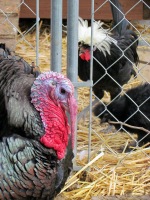 In another outpouring of unexpected charity on Gene’s part, he decided to give poor Thanksgiving a reprieve, mostly because he didn’t want to butcher in the monsoon-like weather we’re having. I never thought I would find myself ecstatic over the fact that it’s raining, but I must say I hope the weather around the end of December continues with the same theme. Maybe then Gene will just give up on his misguided idea that the poor defenseless turkeys are destined to be dinner. I suggested that we roast a nice bald eagle or two, but apparently there is some type of law preventing that. National symbol status aside, those birds had best start treating someone else’s backyard like a giant buffet or it’s going to start raining lead. 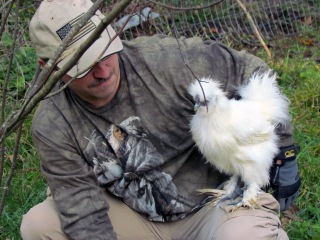 Since King Julian is living it up indoors for the foreseeable future, I moved Marley and Shawn Paul out into the main coop. They are fitting in well with the girls, and have already made themselves at home. I plan to move Fluff Daddy and Puff Mama out soon as well, then the ducks can start sharing the kennel set up with the turkeys. So far the ducks haven’t seemed the slightest bit interested in having any sort of roof over their heads, in fact Paris, Nikki, and Bedonkaduck all sleep on top of the kennel roof no matter what type of weather we’re having. Harvey and Claire are similarly oblivious to the cold. One night was so frigid that everybody’s water froze, so I tried putting a heat lamp in the Bunny Ranch. Claire hated it – she ran around in circles making a weird shrieking noise until I took it down. 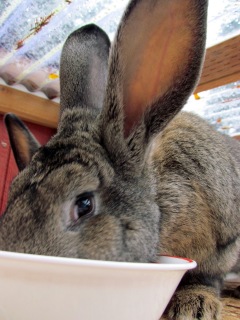 They have turned into bunnies of substantial size, large enough to leap up three feet. They love to jump on top of their hutch, so now they enjoy three levels of ranch living space. For some reason they hop over to me every time I enter the bunny ranch, and when I’m staring at them at eye level, they seem almost too big. I made the mistake of going in there empty handed the other morning, and when I reached in to take their water bowls out Harvey expressed his displeasure by sinking his teeth into my hand. Now at a minimum I bring wheat thins with me every time. Gene said I should have smacked him, but since Harvey can’t use words, how is he supposed to tell me he’s hungry? I think he made his point rather well.